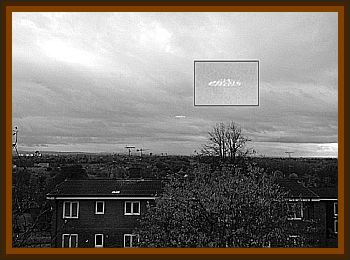 Floating saucer shaped object has been caught on the photograph in the sky over Manchester.

Craftsman John Hindley photographed the mysterious outline. Hindley claims that he felt a magnetic pull towards the saucer shaped object while he took a picture of it.

Being a perfectly rational man, the 35 year old insists that he tried to figure out what looked like a glitch in the cloud. However, he believes he saw what could have been a UFO after zooming in on the picture.

Mr. Hindley was in Middleton, Manchester at his friend’s house on November 7, 2014 when he got up at around 10:00 a.m. and felt a pulling sensation. He looked up into the sky and spotted unusual flying object drifting above the Pennines, approximately 2 miles away.

From the 3rd floor of the house, Mr. Hindley took a picture of the UFO using his mobile phone.

Mr. Hindley explained the he felt a pull in taking the picture out of the window. It seemed that something pulled him to the window, added Mr. Hindley.

When he remembered that pulling feeling after 2 days, he thought of taking a look of that photo. That was the only time he looked at the picture again.

Mr. Hindley said that he felt the same pull when he took the picture, a magnetic pull or a lunar pull. He revealed that he never felt the same feeling before, so he was certain that the mysterious object caught in the photo was not a Chinook helicopter.

He firmly believes that it could have been a UFO, and he thinks that there is an increasing number of people realising that the mankind is not alone around the vicinity.

He explained that the photo exhibits the lights shining in the bright sky. He doesn’t think that the object is the cause of a reflection.

The object, according to the witness, stayed in one position in the sky for approximately 30 minutes before it disappeared.