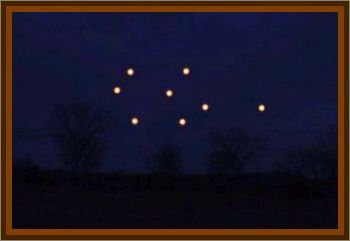 My friend Jason was the first to notice the lights and point them out. We looked NE across the park to see 8 orange glowing UFOs paired off in a staggered formation about 30° - 40° above the horizon. As we looked across the highway at the Gerald Ford International Airport we saw searchlights moving across the sky over the airport. My first impression based on the pulsating glow of the objects was that of aerial flares. However the night was breezy and if the objects had indeed been flares they would have been drifting in the wind.

The 8 objects remained stationary, paired off at equal distance from each other in their staggered formation. No downward fall or drift with the wind currents. The objects were completely silent. (I don't know who else in the park that night may have noticed the phenomenon although it was clearly visible for at least 5 minutes.) I was the most excited, I kept asking everyone around me "Are you seeing this? Tell me you're seeing this." the sighting was verified by the 5 other people that made up our small 'squad' which included several of my closest friends. I was frustrated because I had brought a camera to the event but had left it locked in my car for fear of it being lost or damaged during the course of the game. The objects disappeared one by one over the course of 45 seconds to a minute.

I personally witnessed at least two of the objects disappear as we continued moving along the perimeter of the park. By the time we came to a halt, the objects had all vanished