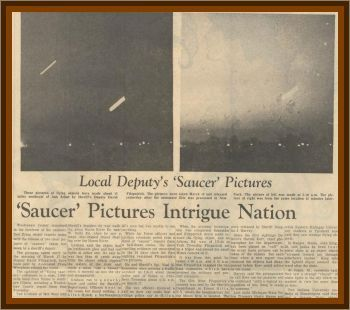 At 3:50 a.m. on March 14 and for 2½ hours thereafter, Washtenaw County sheriffs and police in neighboring jurisdictions reported disk shaped objects moving at fantastic speeds and making sharp turns, diving and climbing, and hovering. At one point, 4 UFOs in straight line formation were observed. Selfridge AFB confirmed tracking UFOs over Lake Erie at 4:56 a.m.

Following is the log of Complaint No. 00967 signed by Cpl. Broderick and Deputy Patterson of the Washtenaw County sheriffs Department:

3:50 a.m. Received calls from Deputies Bushroe and Foster, car 19, stating that they saw some suspicious objects in the sky, disk, star like colors, red and green, moving very fast, making sharp turns, having left to right movements, going in a Northwest direction.

4:04 a.m. Livingston County, sheriffs department called and stated that they also saw the objects, and were sending car to the location.

4:05 a.m. Ypsilanti Police Dept. also called stated that the object was seen at the location of US-12 and I-94.

4:20 a.m. Car 19 stated that they just saw four more in the same location moving at a high rate of speed.

4:30 a.m. Colonel Miller, county civil defense director, was called; he stated just to keep an eye on the objects that he did not know what to do, and also check with Willow Run Airport.

4:54 a.m. Car 19 called and stated that two more were spotted coming from the Southeast, over Monroe County. Also that they were side by side.

4:56 a.m. Monroe County, sheriffs department stated that they just spotted the object, and also that they are having calls from citizens. Called Selfridge Air Base and they stated that they also had some objects over Lake Erie and were unable to get any ID from the objects. The Air Base called Detroit Operations and were to call this Dept. back as to the disposition.

5:30 a.m. Dep. Patterson and Cpl. Broderick looked out of the office and saw a bright light that appeared to be over the Ypsilanti area. It looked like a star but was moving from North to East.

6:15 a.m. As of this time we have had no confirmation from the Air Base.

This is the strangest thing that we have ever witnessed. We would have not believed this story if we hadn't seen it with our own eyes. These objects could move at fantastic speeds, and make very sharp turns, dive and climb, and hover with great maneuverability. We have no idea what these objects were, or where they could have come from. At 4:20 a.m. there were 4 of these objects flying in a line formation, in a north westerly direction, at 5:30 a.m. these objects went out of view, and were not seen again.

It would swing back and forth like a pendulum, then shoot upward at tremendous speed, hover and then come down just as fast.

Dexter police and Livingston County sheriffs, contacted by Bushroe & Foster, reported that they saw the same objects engaging in the same maneuvers.

March 20, 1966, Dexter, Michigan. About 8:30 p.m. Frank Mannor & family, and dozens of other witnesses, reported that a domed oval object with quilted or waffled surface, and lights in the center and on each end had landed in a swampy field. Deputies David Fitzpatrick & Stanley McFadden parked car #34 adjacent to the area and began a search with Frank Mannor.

While in the woods area, a brilliant light was observed from the far edge of the woods, and upon approaching, the light dimmed in brilliance, the brilliant light again appeared, and then disappeared. A continued search of the area was conducted, through swamp and high grass, with negative results. Upon returning to the patrol vehicle, the undersigned officers were informed that one of the objects had been hovering directly over the area where our flashlight beams had been seen, and then departed in a west direction of flight, at high rate of speed.

As he and other officers were rushing to the scene, Officer Robert Hartwell of the Dexter Police Department saw a luminous object buzz his car. Robert Taylor, Dexter Police Chief, said he watched an object in the field from Frank Mannors home on a knoll overlooking the area. It appeared as a pulsating red, glowing object. Through binoculars he saw a light on each end of the thing.