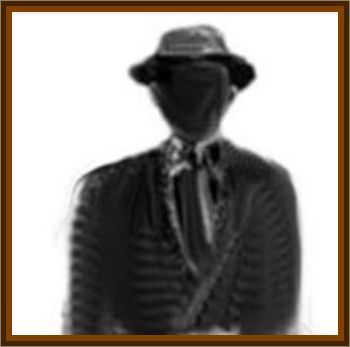 Not sure of the date. I was about 4 years old and in my bed in my own room. It was if I remember right late spring. I was asleep in my bed. As I opened my eyes I saw a man standing in the corner of my room. On each wall there was a window but he was either in the window on the left wall or in the corner between the two windows.

At first I was peaceful, just looking at him. Then I realized that I did not know him. I yelled for my mother: There is a man in my room.

She came into my room, and stopped to light her ever present cigarette, I remember the red glow on the point of the cigarette.

I said: There in the corner.

She went and stood in the corner and asked me: Where is he now?

She stepped out of the corner, and I said: There he is.

She said, There is no one here. I am going back to bed.

And she left the room. I was frightened but have no further memory. The man was wearing some kind of a uniform, it looked military, grayish. Had on sunglasses, or largeish eyes. He was as tall as my mother or a bit taller, around 5' 6". I never saw him again.

When my mother was there, I was completely awake and yet I could still see him. She could not.