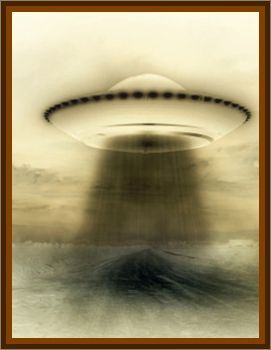 Mrs. Hollins, feeling unwell and not wishing to disturb her husband, she was sitting on the settee in the lounge of her bungalow. At about 2:00 a.m. she was awoken by a bright light shining through the curtains. Perturbed, she wondered if it was their car, parked across the road, which had caught fire. She crossed to the window and pulled the curtains apart.

She was amazed to see that the light was coming from an object low in the sky, hovering apparently over some distant trees. Intrigued, yet slightly afraid, she went out onto the front lawn for a better view.

The object she described as spherical, light grey in color, with a black band around its circumference. Set in the grey area were three dark blue nodules in a triangular configuration. Issuing from one side were red flames and sparks. The sky behind the object was misty and glowed a pinkish red color.

As she watched spellbound, Mrs. Hollins saw a structural device of some sort being lowered from the craft into the trees below. After a short time the apparatus retracted. Then, at a terrific speed, the object moved soundlessly in her direction, turned sharply north, then sped away in a southerly direction, to disappear from sight.

Fortunately, because of the events which followed, the sighting was further corroborated by two other female witnesses living about a mile away. They observed the object from 1:40 a.m. to approximately 2:05 a.m., about the time Mrs. Hollins was woken up. Although their descriptions differed in some respects, this could be accounted for by different angles of observation. Both accounts agree with the flames and sparks spluttering from the object, and the bizarre pink red mist behind it.

The sighting appeared in a few short paragraphs in a local newspaper, a story instigated by one of the other witnesses, and not Mrs. Hollins.

Mrs. Hollins is a lady of average intelligence, struggling to come to terms with what she had seen. Her husband was present in the room, although he played no part in the interview, having a somewhat disapproving attitude. Mrs. Hollins’s strong personality had obviously overidden any objections he might have had to the interviewers, Nigel's (pseudonym) presence.

After more than an hour, during which cross-checking much of the detail of her story, She was asked: Mrs. Hollins, has anyone other than the local paper contacted you?

She replied that only the previous week she had received a telephone call from a man purporting to represent Jodrell Bank, the radio telescope installation south of Manchester, in rural Cheshire. Apparently he was very interested in her experience and wished to question her closely about the sighting. When she asked how he had obtained her telephone number he laughed, and replied: Don’t worry, it was from a very good source.

Do you mean the newspaper? she asked.

He failed to answer, but added he would be in touch shortly to arrange an interview. Interviewers returned a week later, on September 21, with a UFO Sighting Report Form for her to read and sign. Apparently the man had phoned once more, this time he asked her if she would accompany several other people in the area who had witnessed strange phenomena, to visit Jodrell Bank, where they would be asked questions.

She said he seemed to have an American accent, and claimed to have been present when the then governor Carter had witnessed a UFO in Georgia, in 1969.

The man then warned her not to associate with cranks, and stated, yet again, that he would contact her to fix up a time and date to be interviewed.

This seemed a little iscerning, especially as Mrs. Hollins had made the original interviewer so welcome in her home. He was given what she thought was the name of the caller. Although not wishing to alarm her, He warned Mrs. Hollins to treat any future calls with caution. To Nigels, knowledge the Jodrell Bank staff was not interested in investigating UFOs, and passed all such information they received on to MUFORA.

The original interviewer contacted the installation anyway, and asked if they were involved in a program of UFO witness interviews. Their spokesman flatly denied any such involvement, and had no knowledge of the caller claiming to represent them. When Nigel mentioned his alleged name, he sensed the bemusement at the other end of the line. The name Mrs. Hollins had given, was none other than the name of the new director of Jodrell Bank!

Several days later Nigel telephoned Mrs. Hollins. She told him the caller had arranged to pick her up in a car on Wednesday, October 8th, to take her to the observatory. She was strongly advised her not to go unless positive proof of identity was produced. Whoever he was, Nigel warned her, all the indications were that he had nothing to do with Jodrell Bank. The voice was lying.

The arrangements were for 1:30 p.m. She thanked Nigel for the information, but advised him she had no intention of going alone in any case. A neighbor, a former policewoman, had offered to accompany her. Also Mr. Hollins had arranged to be home in order to verify the man’s identity. Nigel suggested that he would contact her later on in the evening to discover what, if anything, had happened. Just before the conversation ended she thanked Nigel for taking such an interest in her welfare.

That was the last time Nigel was to have such an amicable conversation with Mrs. Hollins. Perhaps he sensed something wrong when he put the phone down, because even though she appeared to have made sensible precautions, He was still worried about the whole affair.

Unbeknown to anyone, Nigel arranged to be in the vicinity that day. At 1:20 p.m. he parked discreetly near the entrance to the cul-de-sac. The Hollins’s bungalow is situated at the bottom of the short road, partially screened from the other houses by thick bushes. By 1:45 p.m., 15 minutes past the appointed time, no one had arrived, so Nigel, decided to call on the witness to discover if the arrangements had been cancelled. Repeated knockings on the front door received no response. Everyone seemed to be out, no Mrs. Hollins, no husband or friendly neighbor. Perplexed, and preparing to walk away, Nigel heard something. It sounded like voices, so he peeked through the large picture window into the lounge. He was surprised to see, in view of the fact that everyone appeared to be out, that both bars of an electric fire were on, with a dog lying docilely before it. The voices persisted in the background, and he realized they were coming from either a radio or television set. Getting nowhere, Nigel left.

During the following week or more Nigel endeavoured to speak to Mrs. Hollins, only to be given the run around. When he telephoned Wednesday evening, upon recognizing his voice, she pretended to be a relative, and claimed she could not speak to him because there was a man in the house, and would he call her back later? He did, several times, but there was no reply.

Mrs. Hollins now sounded a very frightened lady. Nigel decided to give the case a rest. He was totally bemused by the about turn in attitude of Mrs. Hollins. Up to 3 days before the alleged appointment she had been as friendly as ever, and seemingly pleased when Nigel had warned her of the caller’s fake identity. What had occurred in the meantime to drastically change her attitude towards him?

The obvious solution was that Mr. Hollis, fearing the whole affair was becoming out of hand, ordered his wife to have nothing more to do with it. But if this was so, why was it not explained to Nigel, making it clear she wanted to drop the case? Why the charade? And why did she sound so tense and nervous on the telephone?

If the strange caller was a genuine example of the MIB at work, then it was probable that she had been put under some sort of pressure not to discuss her sighting any further with anyone. Remember, she had already been warned not to speak to cranks, and perhaps this net had been widened to Nigel and MUFORA. Maybe she had been warned to keep quiet, yet was loathe to sever the connection entirely sensing she might need our help.

The other scenario is that the entire episode had been made up by the witness and was just pure fantasy. Nigel would not rule this out entirely, but Nigel would argue against it on a number of fronts.

For one thing, the sighting itself was no hoax as there were other independent witnesses. So why then would she manufacture the story of the phone calls? It would only make sense if the initial experience had also been a product of her imagination. At no time did she claim the calls were sinister, either, it was only the checking Nigel did which seemed to throw a dark shadow across them.

The content of the calls did seem to follow some sort of pattern similar to others made to UFO witnesses. The voice claimed to be someone official, warned her not to speak to cranks, and tried to upgrade his status by an alleged association with Governor, soon to be President, Jimmy Carter. Of course an added bizarre touch was his name, which happened to be the same as the man who is now director of Jodrell Bank.

As previously stated, the case was rested. Almost two years later, in 1982, it came up for discussion between Nigel and Jenny Randles. She suggested that she should give the witness a phone call in an effort to clear up some of the mystery. Nigel readily agreed.

Jenny phoned and spoke to Mrs. Hollins. She told her she was researching for a book, and had read of her UFO sighting sometime earlier, and would she be willing to speak regarding the matter? Mrs. Hollins agreed, and a appointment was arranged for the following Thursday. Nigel was to accompany Jenny on her visit.

They arrived around 1:30 p.m., and Nigel parked at the end of the close. As soon as Jenny knocked on the front door there was a commotion of banging from the rear of the bungalow. It sounded like someone having trouble slamming shut a door. As they went down the side of the building they noticed a large shed. Peering through its single dusty window they noticed a dog lying there, the same docile animal Nigel had spotted that day on the lounge carpet. They wondered if that had been the source of the noise, although it seemed calm enough now.

The curtains at the rear of the bungalow were closed. This seemed odd, as it was daylight, and not sunny. Jenny knocked on the kitchen door, but no one answered. Then they noticed that the door was not closed properly. She pushed gently against it, and it swung open. She looked at Nigel, he shrugged.

Hello, Jenny called through the open doorway. Are you there, Mrs. Hollins? It’s Jenny Randles, the lady who phoned, we only want to speak to you. At least come and give us an explanation.

Nigel nudged her, there was toast under the grill. It was still warm.

Jenny called out a number of times, but although she had made an appointment, and there seemed evidence someone was at home, they received no reply. After pulling the door closed, they left.

That evening Jenny phoned Mrs. Hollins, who claimed that she had not been at home because unexpectedly she had had to accompany one of her sons to hospital. It was felt undesirable to pursue the matter. The mystery would remain.

The Men in Black, apparent callers who frighten and intimidate certain UFO witnesses. They take on various guises, often complicating a case, sometimes elevating a UFO sighting into something much more bizarre.