Close Encounter Of Over Sized Gnomes 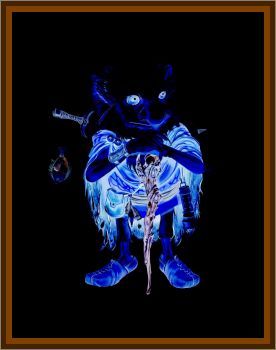 Anne and Peter E. of Wauwatosa, Wisconsin reported their close encounter in November of 1975. They were an older couple. Pete was 64 and was a retired foreman who worked at a local construction company for more than 30 years. Anne was 59, and said she wouldn’t believe this kind of story if she hadn’t witnessed it herself.

The doorbell rang at 7:50 p.m. one night, and Anne looked behind the curtain to see who was there. She saw a strangely dressed man holding a white staff of some kind.

She opened the main door, quickly locking the screen door and said, Yes?

After repeating herself, she realized the man didn’t talk. That’s when she called Pete to come to the door.

What the hell is this, Pete asked, something left over from Halloween? He unlocked and opened the door to get a better look.

The skin on his face was the same as smoked meat and the face was lined with deep grooves, Pete reported later, also describing the strange man as having a small puckered opening for his mouth the size of a dime and a pointy chin. The human like creature also wore a hat, similar to a straw hat, but with a narrow brim. And he had tufts of hair sticking out from both sides. It looked like an over sized gnome, Pete said.

At first, Pete really thought it was a prank. So he reached out to grab the man, but when he did the creature raised his white staff and smacked the sidewalk with it making him float backwards. He didn’t step back or jump back, he just drifted away from me, Pete explained.

Pete looked out toward the street and saw four similar looking beings on the lawn and in the road. They were all dressed alike and they all carried a white staff in their left hands Pete said, Their feet were making walking motions but they were 2" or 3" above the ground.

Pete could see they looked deformed with arthritic claws and legs that were bent and bowed. One of them was heavier than the rest. Pete went on. He was out in the middle of the street. He was rapping his staff on the asphalt and floating 2' to 3' above the ground each time it clicked. The staff seemed to be some sort of energy stick. Pete continued. That roly poly one seemed to be having the time of his life, bouncing up and down like that. He looked like the astronauts looked when they jumped on the moon, only he seemed to have more control over his movements than they did.

Pete called the Wauwatosa Police Department that night. As it turned out, Officer Daniel Anderson had just gotten a similar radio message about strange looking people only a couple blocks away. The police supposedly surveyed the area for three days and found nothing. Pete & Anne said they felt like Officer Anderson thought that they were a couple of nuts, which is very possible, because the officer never filed a report about the incident.

Anne and Pete are convinced they were visited by spacemen that night. But, they did take a lot of crap from friends and family. My own son walks hunchbacked and says click click just to kid us, Pete reported. The couple later found out one of their neighbors had seen a strange vehicle in the sky driving through the Menominee River Parkway. They kept quiet so nobody made fun of them. Peter said that they were probably right to do so.

You know, they were right. Pete said. No one takes us seriously. They all think we are making it up or that someone pulled a joke on us. I’ll believe it was a joke when someone shows me those staffs. Besides, the whole thing took about two minutes. Who would go to so much trouble for just two minutes? And how could anyone get people to float all over my lawn?