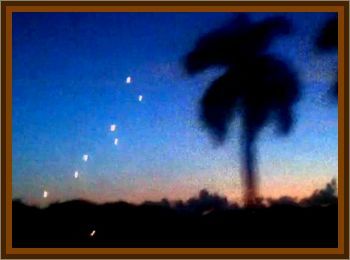 A large cigar shaped metallic object slowly flew over the city at approximately 3:30 p.m. on a perfect Miami afternoon.

About 3:30 p.m., on the afternoon of the 1st post war air show in Miami Florida, I was watching the sky, hoping to see my first jet plane.

A very large cigar shaped silver craft flew slowly over the center of the city and cast a shadow so that hundreds of people looked up and saw it. It was not a blimp, as they were a daily sight on sub duty for years previous, and it was much larger and silent. I was about 13 of 14 years old at the time. My brother, my Mother, my Father and I, as well as many of the neighborhood people all watched it. My Dad, just back from the air force, called it a Foo Fighter.

It flew from east to west, and from our vantage at S.W.4th Ave and 10th.St. it seemed as large as the Dade county court house which was plainly visible and at an altitude roughly twice that of the building. It seemed to fly directly over it. Friends of mine, north of there, placed it in the same location.

It was the main topic of conversation for a day or two then everyone just let it pass. In those days people, including pilots, were not afraid to talk about what they had seen.