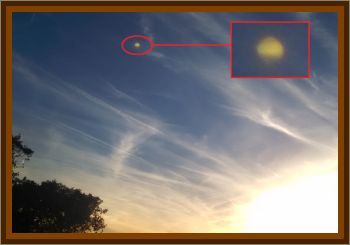 I had three cousins staying over because their parents went on vacaton. It was around 8:00 p.m. when one of them started yelling at us from the front to come outside. My other two cousins & myself ran outside.

I don't recall any words being exchanged, just all of us staring at the sky, slightly from south to north. The UFO was circular with a yellowish color, about the size of a full moon and was completely silent. I could not make out any surface details. The object seemed to be just a circular light.

It flew westward until it disappeared from sight, appearing to fly over Calexico, CA, which is a border town next to Mexicali. The object was not moving too fast. Also, there was 2 or three, I can't remember, jet airplanes tailing it.

Strangely, we were not in an isolated part of the city and still none of the neigbors mentioned anything. It was summer and lots of people were usually outdoors. I guess we became hesitant to mention it to others since we were just kids. I was around 10 years old & the oldest of my cousins only about 3 years older. My cousins still remember the event. I cannot believe we were the only witnesses.