That Was No Meteorite 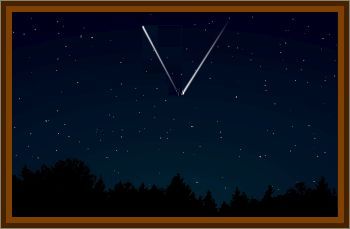 We were sitting outside on a hot night, when one of us observed what looked like a star moving across the sky.

It was a hot night, and my family & others were outside on the lawn, because it was too hot to sleep.

One man observed that there was a star moving across the night sky. The sky was very clear and we could see lots of other stars, but this one was slightly larger, and moving slowly.

At first most of us thought it was some sort of satellite and I remember we were all pretty casual about it. We watched it for at least ten minutes, travelling from East to West, fully expecting it to keep going until it disappeared.

Then to our astonishment it stopped and two smaller stars appeared either side. They shot out accross the sky in different directions at fantastic speeds, before returning to the bigger star then repeating the excercise over and over again.

I remember we were all stunned,as we had absolutely no idea what it was we were watching. Others were starting to get excited and some were getting nervous. I just stayed with my family and kept watching. After a period of about 45 minutes, the two smaller stars seemed to merge with the bigger one and with that, the big star literally shot up into the sky, at such a speed, that if we had blinked at that instant, we would have missed it.

My mother rang the newspaper to tell them, but they told her that it must have been a meteorite. All of us on hearing this stated emphatically, that that was no meteorite.