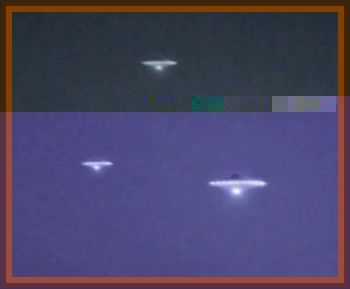 Several 15-17 year olds were on their way to a discotheque in the town of Messel, 12 miles south of the city of Frankfurt.

At approximately 9:10 p.m. they observed 3 groups of lights consisting of 4 round lights flashing in different colors. Each group formed a square of 1.5° diameter at an altitude of about 30°.

The first formation moved slowly and then stopped to hover in the air. The second formation displayed a slow movement as well, but the third group flew very fast over these formations and disappeared. After a few seconds the other formations moved away too. At that time the teenagers went into the discotheque.

At about 9:30 p.m. they were called out by friends to see something strange in the sky. A few minutes later all of them observed a bright blue flash coming from the sky like a spotlight. Soon after that, a steel blue luminous disk with a dome on top appeared over the woods about 1000' from where they where standing. It slowly approached the witnesses at very low altitude, a distance of about 300'. Its diameter was about 30' wide. The dome was divided into several multi colored segments.

Inside the dome, something rotated like a beacon. On the edge of the dome the colors yellow, green and red appeared, one after the other. Near the edge of the disk were 4 square white lights arranged at equal distance from each other. On the bottom of the disk a bluish/white light radiated in non regular intervals, creating a cone like shape. After a few seconds the disk started to move in spiral curves down to the ground, it stopped for a moment before it flew away at a steep upward angle. The excited teenagers immediately called the police.