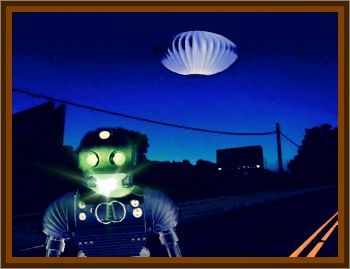 A security guard finishing his rounds encountered a huge brilliant red light hovering above some trees near a construction site. As he approached the site to investigate he was able to see a large hovering saucer shaped object with a hump on its center bottom section. It was surrounded by red light. As the guard moved closer to the object he heard a low whirring sound and the object descended and landed on a tripod like gear. A stairway like protrusion descended towards the ground. Then a figure appeared and began to climb down to the ground.

The humanoid was described as 8' tall, with long dangling arms a huge torso and two stump like legs. His face was long and oval shaped, it had two large tear shaped eyes.

The guard felt paralyzed as the creature began moving towards him using high loping steps, the guard also felt a strong humming inside his skull and smelled an odor resembling rotten eggs.

Moments later on the road behind him a car went by, this apparently caused the creature to walk back and board the object which then lifted off at high speed and disappeared.