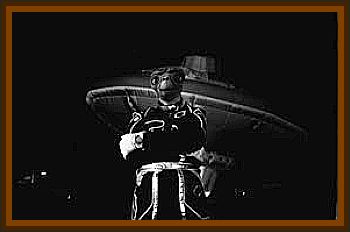 A very interesting sighting occurred near Mersea Island, Essex. The incident took place at 1:00 a.m., and was witnessed by an intelligent engineer by the name of Paul Green, age 29. He was considerably shaken by his experience but had the sense to record the whole of his encounter.

2 weeks later I interviewed, and cross examined him, in the presence of 2 others. Without doubt his story is true, and in addition he described various subjective symptoms which can only be ascribed to the effects of a very powerful magnetic field on the human body. Apparently the field is so great that it produces a kind of light as yet unknown to our science.

The following is a verbatim report of Paul Green’s experience.

It was about I:00 a.m. Sunday, September 14, that I first saw the thing. It was a bright clear night, the moon was up and I could see the stars twinkling overhead. I was returning to my home in West Mersea, having visited my fiancee in Colchester.

I had had nothing to drink and was feeling very fit. I was travelling on a motor bike and averaging 40 mph. Just before reaching Pete Tye common a few yards south of Langenhoe, I overtook a motor scooter. My bike was purring along, the engine sounding a healthy note.

As I approached the straight road south to Langenhoe Hall I heard a high pitched humming over to my left, the east. This noise became louder and I looked up for sign of an approaching aircraft. I could see none but noticed a small pinpoint of blue light to the east over Hrightlingsca, about 5 miles away. The light was winking and became rapidly larger, and I then realized that it was coming in my direction from over Langenhoe marsh. The humming then became very much louder and changed to a high pitched buzz. It dawned on me that the light and the sound were connected. The engine of my bike then began to cough and splutter, it missed several times and then stopped dead and the lights went out.

The blue flashing light was now about a mile away to the east. I could make out some sort of an outline and an enormous object spun into view, looming up large and uncanny out of the sky. It resembled the upper half of a large spinning top and was about the size of a gasometer. There appeared to be a dome on top, inside of which was flashing a strange blue light. The object slowly descended, tilting as it did so, and I was able to catch a glimpse of its under belly. This was rimmed by numerous round objects, the whole resembling a ball-race.

I had dismounted and approached a few paces towards the object. I felt spellbound and was not able to move or speak, just as if I had become paralyzed. The flashing blue light became so intense that it was painful, and it appeared to fluctuate in rhythm with my heart beat and hit against my chest.

I felt myself tingling all over rather like the electric shock one gets when handling an electrified cattle fence for too long. The buzzing then became quieter, and the object descended in the area of Wick where there arc several farm houses.

The scooter that I had overtaken on the road, approached, its engine coughed and stopped, and the rider, a young lad in a leather jacket, dismounted and stood petrified staring at the blue light, lie neither spoke nor looked in my direction. My head began to throb, and I felt as if there was a tightening band round it. With a great effort I was able to move, and I grasped my bike and tried to start it. I pushed it along the road, and was gratified to hear the engine suddenly burst into life. I mounted and raced as fast as I could away from the dreadful and painful blue light. As I raced down the road the object was hidden by a tall line of hedges on the side of the road, but I could still see for some time a blue glow in the sky.

I arrived home at nearly 2:00 a.m., and woke my invalid mother, a thing I had never done before, but so frightened was I by my experience that I had to tell someone about it.

The following day I noticed that my hair and clothes were crackling in an unusual manner, and appeared to be charged with electricity.

A few days later I was discussing my experience with a friend who lives at Shrub End, which is 5 miles northwest of Wick. He told me that at about the same time his dog commenced to bark, and as he opened the door to put it out, a large blue light passed by rapidly in the sky directly overhead. It passed towards the North West.