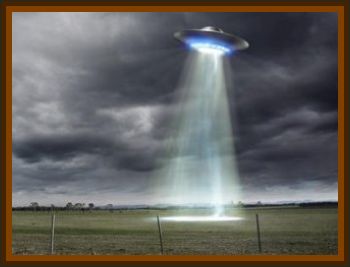 At an unspecified time, a potentially very important event occurred near Merom, Indiana, on the Wabash River that bounds Indiana on the West.

Rene Gilham, a 33 year old ironworker was at his farm home when he noticed an unusual light. He went outside and saw that a brightly luminous object was hovering overhead. Gilham estimated its size as 40' in diameter and its altitude as 1,000'. From this object there beamed out a light that bathed his farm with an eerie, penetrating light.

He stood staring at this object for about 10 minutes, during which time it was temporarily joined by a smaller object. Then the larger object departed, went straight up and headed West. As it did so, the light became more intense, and it emitted a whirring noise like a high speed electric motor gaining revolutions.

Gilham’s wife and children, and his father in law in the adjacent house, also saw the object but did not watch it continuously. The other members of the family verified the fact that the object was so bright that it lighted the entire surroundings.

On the day after he had stared up at the UFO, Gilham’s face began to itch and redden, and that night the sunburn was so painful that he went to a doctor on of the 8th. The physician, Dr. Joseph Drake found that Gilham’s condition was not a rash such as might be caused by poison ivy or an allergy, but a real burn, similar to the burns that are inflicted on the face and eyes when working near an arc welder without a face mask. Gilham said that he had not been near a welder for 3 weeks.

2 days later, his condition worsened, and he was taken to Mary Sherman hospital in nearby Sullivan, IN. Hospital staff members refused to talk to reporters about the case and permitted no visitors. Notably, they refused to say by whose orders the patient was being held incommunicado.

The Terre Haute Tribune, after mentioning this, adds that it was known that military authorities had been informed about the case.

However, it was announced on the 11th that the swelling about the eyes and reddening of the skin had lessened today, and that Gilham was expected to be released the next day. Whether he was or not is not known, and nothing further is known about this intriguing event.

It may be noted to add that at approximately 6:30 p.m., on the evening of the 6th, numerous people in Sullivan, IN watch a glowing orange/red object in the southwest. The time and direction would seem to indicate misidentification of the Planet Venus, but Merom is also southwest of Sullivan, and several of the Sullivan witnesses described a smaller, reddish object moving away from the larger object and finally disappeared in the East.

While the Sullivan observers may be corroborations of Gilham’s sighting, the possibility remains tentative, because the time that Gilham saw the UFO was not given.

The Merom report is one of those that cried out for a full and thorough inquiry by competent investigators. Yet, to the best of my knowledge, this did not occur, either then or later. This is not a Blue Book case, nor am I aware of any investigation by civilian researchers. Does anyone know whether NICAP or APRO ever made any attempt to investigate this potentially important event?

What a damn shame if they failed to pursue this matter. All we have are some newspaper articles that demanded a follow up. Something very interesting apparently occurred that night in Indiana, but apparent failure to conduct an all out inquiry has ensured that what it was will never be known with any certainty.

Hopefully, insightful commentary by list members would be appreciated.

Seeing this case in the Ohio UFO Notebook brought back memories. A friend and I both called the Sherman hospital in Sullivan, Indiana as part of a NICAP investigation of the Rene Gilham case. We were told by the hospital reprehensive we talk to that patient records were not public property and that they had a small fire in the records room and that the records were not available.

Years later, after the efacts, we learned that an Air Force officer had been sent to investigate this case for Project Blue Book. We later met this officer on an unrelated case in Illinois. So we were never really able to follow up on this case.