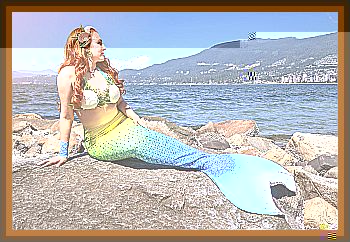 Two girls on the island while searching for shells in rock crevices, encountered an animal of a human form, leaning on its hands. One girl promptly stabbed it with a knife. It moaned and died.

Afterwards a physician went to the site and examined the body, finding it as big as the largest man, with the white skin of a drowned person and the breast of a full chested woman a flat large nose, a large mouth, the chin adorned with a kind of beard, formed of fine shells, and over the whole body, tufts of similar white shells.

It had the tail of a fish, and at the extremity of it a kind of feet.