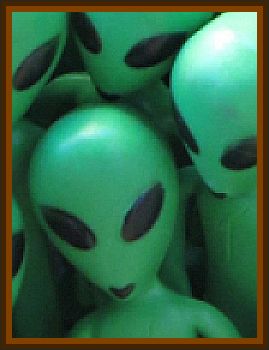 Near the town of Mercury. At the time, the unnamed witness, was a serving airman, and was on leave and heading to Laredo, TX with his wife & young daughter. He was due to for dispatch to Thailand very shortly, so they would stay there with family until he returned.

They had set off in the early afternoon. A make shift crib was set up on the back seat for his 1 year old daughter, and their young Labrador puppy was comfortable in a dog carrier at the back of the vehicle. He and his wife would sit up front. It would be a long trip, but one they hoped to make with as few stops as possible.

All was normal with their journey to begin with. Then, shortly after midnight, things changed.

By 2:00 a.m. they were on a long dark stretch of road that went on forever. Only the witness was awake at this stage, his wife asleep in the passenger seat beside him. He could see what he thought was a roadblock ahead of them. A reflection of cross stripes shined back at him from his headlights.

It was only as he got a little closer that he started to question why an active roadblock would be on such a lonely road in the middle of the night.

He quickly checked his speed. He was currently traveling around 70 mph and so would be right on top of it very shortly. He began to reduce his speed slightly and attempted to wake his wife. However, the closer he got to the strange block he began to realize there was nobody at it. Furthermore, all he could see was the low lying structure with the cross stripes on it.

Then, from the back of his car, the family puppy began to howl wildly and in a greatly agitated state. The sound unnerved the witness, as it did his wife, who was now awake and somehow feeling that they were in great danger. The puppy continued howling until they were past the mysterious roadblock.

The witness pressed his foot down on the gas pedal once again, the car picking up speed. He would recall in his report that something told me to go and not to stop. As they rounded past the apparent roadblock, though, both he and his wife noticed a strange setup, like three raised platforms, raised around a cleared center area. The area glowed with very bright lights. It was then they could see the many men. Or not.

The witness thought they were men but there was something different about them. They were very white in coloring and each wore tight blue overalls. They were moving around with eagerness, and there were numerous pieces of strange equipment about the place. Interestingly, whether it was a difference in memory or a difference in perception, the witness’s wife remembered the figures to have blue skin and white overalls.

By then, their vehicle was past the scene, moving at around 75 mph, a speed at which he maintained for close to an hour. Eventually, when he was certain that there was enough distance between the bizarre activity behind them and their current location, he began to ease off the accelerator. Feeling extremely tired, when he noticed the lights of a store, albeit closed, he would suggest that they pull the car over and rest there for the evening. His wife agreed.

After bringing their vehicle to a stop, he quickly went to the back of the closed store to visit the toilet. As he made his way back he took in the almost picturesque surroundings, right down to the hanging sign that swung in the breeze. He got back into the car, and along with his wife, closed his eyes for some much needed sleep.

Then, came the tap at the window. He opened his eyes in response to the urgent knocking. He could see a man looking in at him asking if they were OK. As the witness came to fully, realizing how surprisingly refreshed he felt, the mysterious man asked how the accident had happened. When pressed as to what accident he was referring to, the man would reveal that their car was over fifty yards from the road in the middle of the desert. The man was driving by when he noticed them.

The witness looked around his surroundings, realizing it was bright daylight. His wife was also now beginning to wake up. He replied to the stranger that he was fine and then stood to take in the vicinity in a little more detail, confusion beginning to stir all the more as he did so.

The quaint sign swinging in the breeze the previous evening was now gone. As was the store itself. They were indeed in a clearing some distance from the highway. He also noticed considerable damage to the underside of his vehicle with no memory as to how the damage occurred.

The family would travel on as far as they could until they arrived in the town of Mercury. There, repairs to the vehicle caused them to sell some of their possessions in order to repair it.

It was almost a decade later when he would report the incident. How their vehicle was transported to the middle of the desert and when during the early hours this happened, remains a mystery.