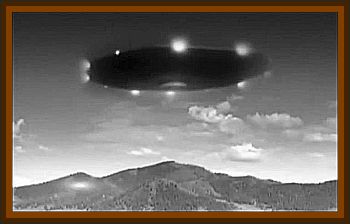 Herbert Mitchell and employee saw a dark, disk shaped object, trailed by a silvery light two lengths behind, tipped on its side, dive, hesitate then circle very fast.

Mr. Herbert Mitchell and an employee of his, Jack Bennett, spotted a perfectly round dark object to the SE. The object was estimated to be larger than a B-29 and was below the clouds estimated to be at 12,000'.

Right after they spotted the object it tipped on edge into a steep dive towards them, diving about two or three thousand feet. During this dive they got a good view of the object which Mitchell described like a disk from the side. At the end of the dive the object did not round out like an airplane but righted itself smoothly and stopped momentarily before beginning a slow circle to the left.

It was at this tine that they noticed a translucent silvery light behind the object a distance equal to two diameters of the object itself and apparently not connected.

The object circled slowly to the left, completing the circle, then made a second circle, and finally took off at high speed to the NNE towards Castle AFB and also towards a large hole in the clouds about 8 miles away where blue sky was showing.

The object passed out of sight through this hole. The object was in view for 2 minutes.