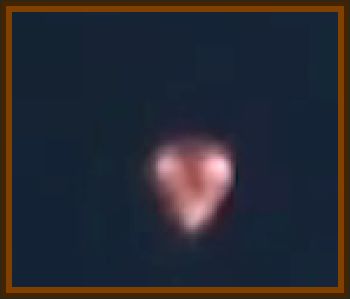 Sharp cone/triangular object, about the size of a car, color orange, moved in a straight line passed us, paused for a split second at our position and then took off in linear direction at extreme speed.

From the East horizon to West horizon, including pausing at our location, took about 1meppel seconds. It made no sound, estimated distance from us was about 45'. Altitude about 30'.

We saw it in a blink of a second but all concluded the same, that it was really close and we felt we could almost touch it. We were on foot, no windows/sunglasses or anything that could cause reflection. The sky was light cloudy so we could perfectly look up without being bothered by any sunlight. And as said it was really close, our dog noticed it also.

We all looked up to the right as it flashed by and then looked at each other and came to the conclusion we all saw it.

So a brief relief there that we weren't having some kind of personal brain freeze.