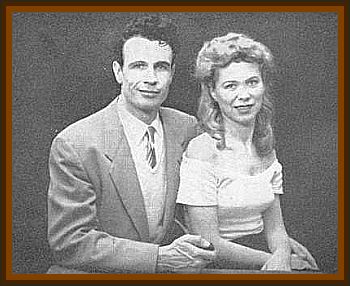 Howard's story as a contactee begun as early as in 1932 at the age of 10. When he was walking toward his favorite spot in the forest, he saw a beautiful alien woman at the age of 25 sitting on a rock. She said her name was Marla, a beautiful blonde from space who claimed to be 500 years old. She projected warmth, love and physical attraction, which he found irresistible.

Menger claimed lifelong contacts as well as flashback memories of an earlier life as an extraterrestrial.

The space people were mostly from Venus, and prominent among them were beautiful, blonde women.

In early 1956, when the contacts intensified, Menger began taking photographs of alleged space craft. He also claimed interplanetary flights in the company of Aryan type beings and produced, among others, pictures of the lunar surface taken from a flying saucer.

One supporter apparently was Connie Baxter Weber, an attractive young blonde woman to whom Menger, a married man, had turned his romantic attentions. Menger declared Weber to be the sister of the spacewoman he had met in 1946. For her part, Weber recalled that in previous lives she had been a Venusian and Menger had been a Saturnian, a relationship she documented in her sexy lurid 1958 book, My Saturnian Lover. In which she describes her destiny with her lover, Howard, as a shape shifting large Saturnian Alien and both of them enjoying Galactic orgasmic sex together as Aliens. Though later in life, they denied the Alien experience and claimed the photographs were faked, they were both still considered a big part of the abductee family at UFO conventions.