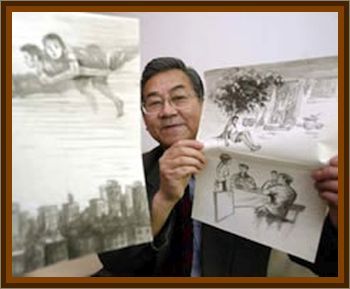 While working at the Red Flag logging camp, Meng Zhao Guo & 2 co-workers alleged they had seen a strange metallic shine coming from Mount Phoenix. Meng went to investigate what he thought was a downed helicopter. When he approached the site he stated that something hit him in the forehead, knocking him out. A short time later, Meng claimed he encountered a 10' female alien with 6 fingers and braided leg fur. Other than that, she looked human.

He maintains that for 40 minutes he had sexual intercourse with the alien while floating above his sleeping wife & daughter. The alien then disappeared, leaving Meng with a small scar on his thigh. He alleges a month later to have levitated through a wall and encountered other aliens aboard their craft. He asked to see the female alien again, but was told that it wasn't possible. He states they told him that on a distant planet the son of a Chinese peasant, his child, will be born in 60 years.

In September 2003, Meng was given a medical exam and a polygraph test and placed under hypnosis in an attempt to reveal the authenticity of his claims. Zhang Jingping, who organized the testing, said that Mengs results indicated that he told the truth. Zhang also stated that after a doctor had checked Mengs scar, they concluded that the scar could not possibly have been caused by common injuries or surgery.

Few Chinese claim to have managed to get quite as intimate with an extraterrestrial as Meng, a growing number of people in China believe in unidentified flying objects, or UFOs.