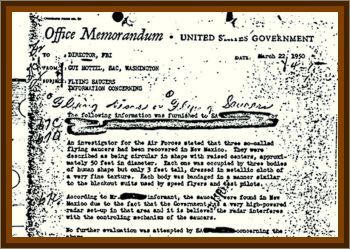 A one-page memo was addressed to FBI Director J. Edgar Hoover from Guy Hottel, then head of the FBI's Washington, D.C., field office. It relayed some information from an informant.

CONCERNING: An investigator for the Air Force stated that 3 so called flying saucers had been recovered in New Mexico. They were described as being circular in shape with raised centers, approximately 50' in diameter. Each one was occupied by three bodies of human shape but only 3' feet tall, dressed in metallic cloth of a very fine texture. Each body was bandaged in a manner similar to the blackout suits used by speed fliers and test pilots.

The file was released in April 2011 under the Freedom of Information Act. The memo is dated nearly three years after the infamous events in Roswell in July 1947.