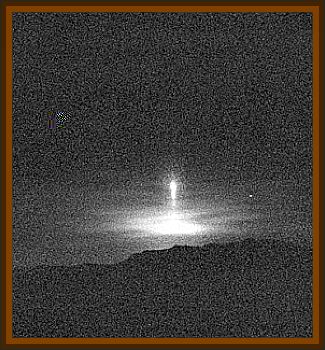 Melissa Rose of Sandy has had a few UFO encounters.

During the time when all of the animal mutilation was going on during the late 1970s and early 1980s.

I would spend my summers with my dad in Montana. I was about 13 at the time. I was already creeped out just being in the mountains and staying in that old cabin.

It happened while we were sitting around the campfire.

The sky that night was so clear. We saw 6 to 8 UFOs chasing each other way up high in the sky, almost like a game, Rose said.

She had another experience in her Sandy neighborhood.

My husband and I were so freaked out. The UFO was silent, black and in the shape of a stealth. It took over the night sky. We were lying on our trampoline just waiting for a meteor shower.

Everything went silent, no wind, no birds, nothing.

The sky went blacker than it already was. The UFO that hovered over our house was so low and close to us. It scared us so bad, she remembered.

Aaron Smith had a unique sighting:

I was probably about 15 years old in my backyard in Orem. It was in the middle of the afternoon and I saw a large stony, craggy gray object floating through the air in daylight.

You could tell it was really high up in the air, but from where I was standing it was the size of a basketball. It must have been huge.

It moved unnaturally slow, much the same way you wouldn’t expect to see a brick slowly floating through the air.

To this day, I wonder what it was I saw, Smith said.

Another Sandy resident who requested to be anonymous said:

People think I’m weird because I tell them aliens are trying to talk to me through my truck. I know it might just be a broken speaker making that noise, but I really have seen UFOs.

Then he scratched his long beard before continuing on.

I was headed west on Timpanogos Highway one late summer night. I saw a bunch of lights above Camp Williams in Bluffdale, UT. The lights were zipping around, going in all kinds of crazy directions really fast. I was in the military for 8 years and I’d seen lots of stuff, but I’d never seen anything like that.

I guess it could have been 50 to 100 drone enthusiasts flying toys above an army base. I know the US Army is super cool with stuff like that.

His story ended with sarcasm over the last comment.

For those who took flight with the City Journals to levitate over these accounts, good job, brave reader. UFO sightings happen all the time. And maybe aliens are involved?

Who knows. They could be studying why humans get goosebumps, have tiny eyes and luxuriously long arm hair. There’s so many things for aliens to be totally fascinated with — like essential oils and fry sauce.