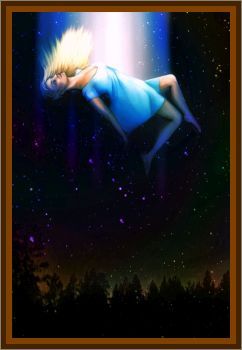 Melinda Leslie and two friends were driving through the Los Angeles forest when all three experienced a 2 hour long abduction into a metallic craft piloted by gray type aliens. Once on board they were undressed, examined, separated and given separate messages.

Melinda was able to recall the entire event consciously. As she was laid out and examined, she hammered the aliens with questions, none of which they answered. She saw here friend sitting in a chair with a bizarre looking headset on him and she screamed out, What are you doing to him? One of the aliens replied, It’s all right, we’re giving him information. It’s all right. We’re educating him.

Melinda continued to let out a stream of questions, however she was rarely answered, and then, only in an evasive manner. At one point the 3 friends were separated and placed into different rooms. Melinda found herself in a room with a dozen grays. One stepped up to her and said: Now, we’re going to do something. Don’t be afraid, but this is very important that we do this. We’re going to put this over your head.

What followed was a bizarre procedure.

A device placed over her head immobilized Melinda. The aliens stood in a circle around Melinda and pushed her back and forth like a punching clown. Melinda felt she was going to fall, but each time she was caught and pushed again. Finally, she relaxed. At this point, they stopped and removed the device. One of the aliens said: You needed to learn that…you needed to learn to trust us.

Meanwhile, Melinda’s friend, James was receiving a different message. The aliens came over to him and they showed him a device, different items. They told him how to make a UFO detector, and they gave him the information. When sightings happen, they told him he had a mission to document them.

According to James: They showed me how to do this. And they explained the whole thing technically to me, and I was given the information how to build those. They were done and they made sure I understood. And I said, Yes, I understand.

Melinda’s other friend was unable to recall much detail other than being taken onboard and examined.

Melinda continues to have experiences and has lectured extensively about her encounters.