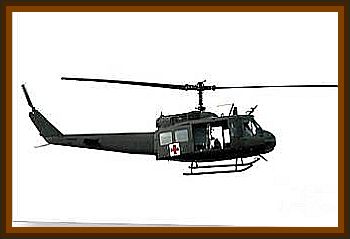 My name is John Healey. At the time of making this officially transcribed statement I was a Detective with the Cleveland Police Department.

I was also a U.S. Army reservist training as a flight medic. The incident occurred when I was traveling on a helicopter with 3 other reservists, on the evening of October 18,1973, about 10:30 p.m. We were halfway between Columbus and Cleveland, near Ashland, when the crew chief saw a red light on the horizon.

He asked the pilot if there were any towers around there and was told there were not. As we went along at an altitude of about 3,000', the light seemed to be growing brighter and brighter.

It appeared to be on a collision course with us. It kept coming right at us. The pilot had to put our helicopter into a power dive to avoid it.

We were looking right through the windshield watching this thing, and it damn near came to a stop right over us. It just hovered for a while. We all got a very good look at it.

It had a steady red light on its prow. It was cigar shaped. There were no wings on it. It made no noise, created no air turbulence. It had a green light shining down out of aft end. It shone down, and on us, and you could see a definite cone shape, the shape of the green light beam.

I've seen aircraft from PT-l9s up to C-5As so I know an aircraft when I see one at night. But this thing scared the living hell right out of me.

We contacted Mansfield Airport and told them we were almost in a collision with an unidentified flying object operating at 3,000' and 600 knots.

We tried to get ahold of Cleveland Airport and we couldn't, until the object passed over us.

It continued to the west, picked up speed, and we lost it over the horizon.

We never saw it again.

We talked about this sighting all the way back and we just couldn't dope it out. The thing didn't have wings but at 3,000' you have to have wings to stay aloft. It wasn't a dirigible or a zeppelin because those things don't move at the speed this thing moved. Clandestine aircraft wouldn't operate at that speed at that low altitude. All 4 of us filed official reports.