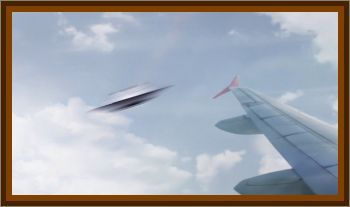 In May of 2000, my wife and I flew on a TWA MD-80 from Phoenix to St. Louis and on to Cleveland, Ohio and back again. The flight to St Louis was uneventful, but the flight from St Louis to Cleveland was certainly not.

Shortly before arriving at Cleveland Hopkins, it was dark, almost midnight, but there was enough light to see out the window. We could see clouds below and around us, I believe we were beginning to descend down through them. I recall seeing clearings through the clouds, so there must have been a full moon, I can't be sure though.

We were sitting two seats, forward of the wing along the right side of the aircraft. She had the window seat. We were both enjoying the view out the window, something then appeared from just below and forward of the plane. It appeared to be flying at about a 15° angle to our plane. As it came from beneath us, it was flying out and away from our right side. Then it lifted it's right side sharply causing it to bank sharply left, then banked right, causing it to change directions. In the span of a few seconds it had managed to complete an almost perfect 90° turn to the right. The craft then passed us to our rear on a path now parallel to ours, but in the opposite direction, and disappeared.

This alone was amazing enough for me, having served in the USAF from 1968 through 1975, I am not completely unfamiliar with fast moving aircraft. I have never seen any aircraft make such a maneuver that rapidly. I don't see how the craft could make the turns, let alone the occupant(s) of the craft. The G forces must have been tremendous.

I remember noticing that the MD-80 we were on didn't adjust it's course at all. I'm not sure they saw the craft. As I said, it appeared to come from below and forward of our plane from our left to our right. It's possible the crew of our plane never saw it. Perhaps it came at us from the side and was not visible on radar.

I tried to get a good look at it to see what it might be, but it simply happened so fast, I was not able to do so. I remember it was all lit up in a brilliant light. Not running lights as one would expect to see on an aircraft, the craft itself seemed to glow in a brilliant white or yellowish white light. I could not make out the shape exactly. I don't recall seeing any wings. My wife, who I think saw it first, did says she saw what looked like wings, but they were very small. To me, it appeared to be more or less flat with a round front end and elongated body. It was almost rectangular. My wife also said she saw the brilliant light all over the craft, but said she also saw many blinking lights. I did not see any blinking lights, but then I was not next to the window, but away from it.

If this was an aircraft, it was not one of ours, it was in our air space and flying very recklessly, besides, it could not turn in such a manner and survive. I believe it was something else. I do not know what.

The really amazing part of this story is not that it occurred or that it made a nearly perfect 90° turn or that it was illuminated in such a manner, or that it had no wings or hardly any wings at all. Our plane was flying in excess of 450-500 mph when this craft appeared out from under and just forward of us. With that in mind, consider the maneuver I described, the craft appeared to be in the same position relevant to our position for three to four seconds as least. We (my wife and I) were still observing it out the window on the right side, looking forward in the same position. These maneuvers took place no more than 150' from our position. The point is, while it was maneuvering, we should have sped right past it and yet it seemed as though we had not moved forward at all.