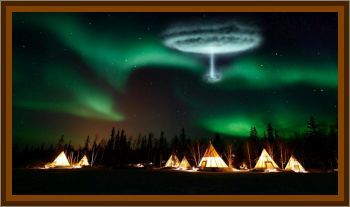 This sighting occurred by Bob McKinnon and his family and friends at Canyon Creek on the Alaska highway.

Bob McKinnon, who operates a stopping place there, explained it was about 8:30 p.m. when he, noticed a strong light beaming through the windows from the direction of an old Indian burial ground on a mound about half a mile away.

Like many others in the north, the burial ground is dotted with wooden huts about 4' high, fashioned exactly like small houses, under which the Indians have placed their dead. They believe these huts provide protection and comfort for the departed souls.

At first I thought the light must be coming from someone working over there, but I soon saw this was impossible. It was hanging absolutely motionless in the air, may be 100' up, and looked to be about 2' in diameter. It was a bluish orange color, something like the reflections off a diamond.

Bob called the others in the lodge and, going outside, they had a clear view of the object for about three minutes.

At first it just stayed there, right above the graveyard, he continued. Then after a moment it started to come down slowly. We definitely had a feeling it was interested in the place. It came down to within a few feet of the ground and lit up the graveyard huts. Then suddenly it disappeared. Maybe it went behind the mound, I'm not sure, but it looked more as if it flashed right out.

When Bob made his report to the RCMP, they said the object must have been a meteor but none of the witnesses would agree that was the least bit likely. The light was unmistakably hovering when they first saw it and it descended with feathery slowness.

I never had any time for flying saucers before I saw that thing, and I'm not particularly interested in them now. I think most of it is just baloney. But definitely there was something strange happening out there over the cemetery that night.