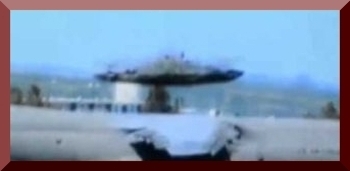 Airman First Class Steven Briggs & Airman Dennis Hillsgeck were instructed to check the tactical air navigational facility located 8 miles east of McChord Air Force Base. The TACAN site was situated on government land maintained by the United State Army, Ft. Lewis. Briggs & Hillsgeck drove to the TACAN site at approximately 1:00 p.m. Upon their arrival, they opened the locked fence surrounding the facility and entered the compound. Once inside, they opened the TACAN building and began to conduct a systems check of the equipment.

At approximately 2:00 p.m., Briggs heard a strange sound outside the building. According to Briggs, it sounded like a high pitch engine. Briggs exited the building to investigate the sound. Once outside, Briggs observed a saucer shaped object directly above the building. He watched as the object landed just south of the compound, and was startled by the object and entered the building to summon Hillsgeck. Once Hillsgeck & Briggs exited the building together, they observed 2 entities walking towards the fence. Briggs returned to the building and telephoned the base security police. He yelled that they needed help at the site because intruders were attempting to enter the facility. The phone call was received by Sgt. David Holmes, the Law Enforcement Desk Sergeant, 62nd Security Police Squadron. Sgt. Holmes dispatched Sgt. Dwight Reid & A1C Michael Tash to the scene. It took the security police patrol 17 minutes to travel to the TACAN site.

Upon their arrival, they observed Briggs & Hillsgeck standing near their vehicle. Both appeared to be in a daze. Neither could speak. Sgt. Reid summoned an USAF Ambulance to the area. Hillsgeck appeared to have been burnt around the face. A1C Tash walked around the area and found marks in the soft dirt. Then, Sgt. Reid yelled to Tash that an object was directly over his head. A saucer shaped object was hovering just above the facility. Sgt. Reid attempted to communicate to the security police law enforcement office by using his Motorola HT-220 portable radio. However the radio did not function. Sgt. Reid then yelled for Tash to return to the police vehicle. Sgt. Reid & Tash retrieved Briggs & Hillsgeck and drove from the site.

Approximately one mile from the TACAN site, Sgt. Reid was able to communicate with the security police office, requesting assistance and declaring a Covered Wagon. 4 additional security policemen arrived on scene, including, Sgt. Darren Alexander & his military dog, Champ. Sgt. Alexander & Champ drove to the scene and started to search the area. Approximately 400 yards south of the TACAN site, Champ alerted. Sgt. Alexander observed 2 entities standing near a remote power station. Alexander yelled for the entities to stand and raise their hands. Both entities then moved towards Alexander. Sgt. Alexander observed that one of the entities was holding an object, which Sgt. Alexander thought was a weapon. Alexander fired 6 rounds from his military issued Model 15, .38 Caliber Revolver. After firing the shots, Alexander returned to his vehicle and radioed Sgt. Reid that he had fired at the entities. A Security Alert Team arrived. They conducted a search of the area and observed the saucer shaped object sitting on the ground, directly east of the power station. They circled the object and called for a supervisor. Captain Henry Stone, Security Police Law Enforcement, arrived on scene but the object departed just as Captain Stone walked towards the object. The object flew off in an easterly direction and was out of sight in a few seconds. Office of Special Investigations agents arrived on scene and conducted an investigation. Statements were taken from all involved. Evidence was collected from the scene, to include shell casings from the rounds fired by Sgt. Alexander.