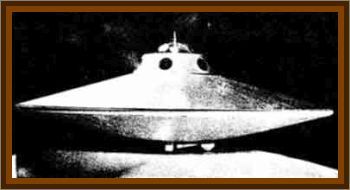 During his Christmas vacation, Robert McAllister, a student, was out checking his animal traps when he came upon a circular object hovering 6' off the ground. About 15' in diameter, the object made no noise and Robert approached to within a few feet. From behind some rocks emerged 3 figures, their heads encased in helmets, they held a cable at the end of which, floating about 10' off the ground, was a chair, on which sat a smiling, apparently aged man, with silver hair and a benign smile. He wore a kind of tunic, while the 3 men on the ground wore uniforms of a hard, shiny blue type of material.

Ignoring the boy, they escorted the seated man to the object, in which a door opened, the man and two of his escorts entered, the latter by floating up to it. The remaining figure approached the boy and, placing his arm around him, led the child around the craft, pointing out various features and speaking in a strange language the boy did not recognize. Noticing a ball point pen in Robert's pocket, the man took it to write a paper he drew from his pocket, when Robert indicated he could keep the pen, he again reached into his pocket and brought out his own, which heave gave to the boy. Repeating a phrase that sounded like, "Ab-doon! Ab-doon!" he floated up to the door and disappeared inside. The door closed then re-opened, and then man made gestures for Robert to move further away; then the object rose slowly and silently, suddenly shooting off at tremendous speed. After school had resumed, Robert was visited at his home by a stranger who handed him a deaf/mute card, the man, rather than accepting the offered coins, asked for the pen, the one given to the witness by the humanoid, which he took and quickly left.