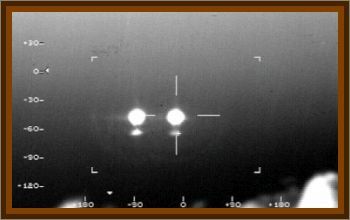 A DC-8 cargo flight was enroute from St. Louis to Dallas, at about 2:30 a.m. At a point near McAlester, OK, the copilot noticed what he first thought was another aircraft just below the leading edge of the right wing about 5,000' away. The object was on the same course and speed, keeping a constant position. Only its steady amber light seemed unconventional. The object rose straight up like an elevator, made a sharp turn and approached the plane, taking up a position about 300 yards away and slightly above them. It was disk shaped with a transparent dome on top, its silvery, highly polished surface reflecting the moonlight. Besides some stubby protrusions no other features were visible.

The captain switched on the weather radar and it confirmed that something real and solid was there. When the radar beam hit its surface, the object reacted immediately, ascending straight up, then moving sideways over the DC-8 and briefly out of sight. The object reappeared quickly, descending straight down and taking up a new position just below the leading edge of their left wing. It then dropped below and behind the plane, abruptly reappearing only about 300' below them. Looking down into the dimly lit dome, the pilots saw 2 or 3 shadowy entities moving around. The object then darted out in front, performed various oscillatory motions and another sharp, noninertial, turn before speeding out of sight. It disappeared off the radar scope at a distance of 50 miles.