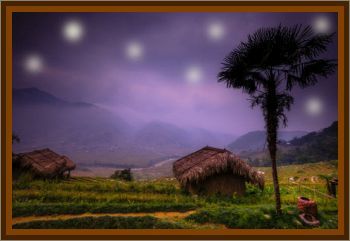 At the beginning of the Vietnam War, Pete Mazzola was a young soldier. Although not interested in UFOs at the time that he shipped off to the front, Mazzola experienced sightings that made him believe in UFOs.

Throughout his tour, Mazzola noted that he saw many meteors that moved in a way that was unlike a normal shooting star. Later in the war, he even had a direct experience with a UFO.

While on patrol, his squad got pinned down by enemy soldiers. They stayed low and hid, hoping to find a way out of the mess. As they were trying to figure out a way home, they saw bright objects rise up over the paddy fields and hover in the air.

When the objects rose in the air, they took fire from the American warships to the south. But surprisingly, the Vietcong also started shooting at the floating lights. Neither side could touch the objects. Mazzola recalls seeing the shells explode just short of the lights, even though they were right on target. Whatever the lights were, neither the Americans nor the Vietcong recognized them as friendly.

The experience had such an effect on Mazzola that he founded an organization called the Scientific Bureau For Investigation after the war. Based out of New York, Mazzola dedicated his life to researching UFO experiences and other paranormal events.