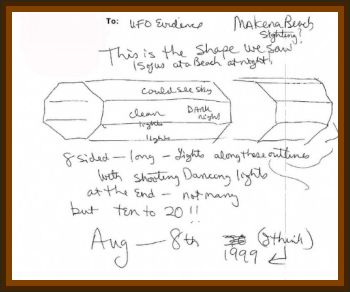 We were sitting on the beach with a fire, for mine and pals shared birthdays when I saw these lights headed towards Maui from the direction of Oahu.

I thought they were headed towards the airport here on Maui, but these bright lights turned and headed along the Kihei beach, slowly.

There was a break in the object, and then there was a second, same 8 sided shape tube, closely behind it, didn’t look connected, but it could have been, and as it passed I saw many darting lights flying around the end of the object.

There were the annual August meteor showers, and you could see them above this object.

It was huge, and we all got really alert, and I was scared. I don’t scare easily.

It flew slowly in front of us, then turned left, and flew over the top of Haleakala, and then we heard later, from other people here on Maui, down the other side and then gone. The whole state was abuzz with this for a few days, then silence, except for those that we’re together. We call it The Sighting.

I had good friends having a bonfire directly up the mountain from where we were, and they saw the exact same thing.

I am an inter island sales rep, and a few days later, flying to Kauai, I met someone on the plane who said that they had seen the same thing on Kauai, and so did many others there.

At the opening of the Super Computer site, partial military, open house a few weeks later, I asked a representative from the large telescope company why they don’t admit that what we all saw here in Hawaii was a UFO. After 2 short diverting answers to my repetitive questioning, he finally said:

Because the public couldn’t handle the news.

The second sighting in my life.

Many years earlier, on the backside of Maui, up in Kanaio, I was in a hot tub and laid my head back on the ledge of the tub and saw 3 lights flying over the rim of the Haleakala Crater.

They were blue lights. I watched them, as they traveled just over head for a few minutes. Then they all of a sudden turned red and moved very very quickly forward, and then disappeared.