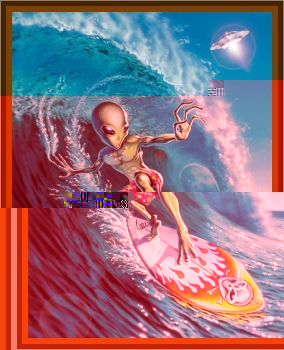 We were filming a Warners Brothers, we had several world champ surfers who told me that when they surf, the little alien men follow them in, as almost fan like interest.

An unnamed surfing champ asked: Want to see a saucer? I said sure .

We walked dozen or so yards around small hill, there it was pearl shaped 10' to 15' tall, 2' off ground, with a noticeable force field circling the object. 6' high beveled front window 2' across spot light under window color suspended in midair, lazer like then changed colors.

Occupant was 3' to 4' tall French foreign flap baseball cap, ignored me, was busy with what seemed like many computers looked like a thin jockey only smaller body suit, expressionless face.

Later that night many saucers descended onto the mountain college site we rented for the movie, flipping out a few lighting guys who flew back to Los Angeles next day. Old time conservative director told me 10 years earlier he had seen a mothershio in the fog of Molakai 100 miles long over 100 miles high, very straight older fellow.