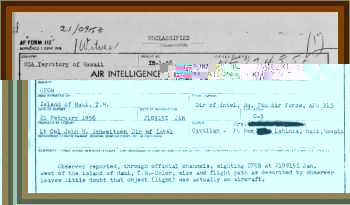 A 1956 UFO report from Maui is included in now unclassified documents that were compiled and investigated by the US Air Force.

According to the Air Intelligence Information Report, a 56 year old retired Lahaina woman reported seeing an orange object with a flame and muffled roar during the evening hours on January 20, 1956.

Investigators noted that, the color, size and flight path as described by the observer leaves little doubt that the object was actually an aircraft. Furthermore, diffusion and refraction of such lights passing through the dense atmosphere close to the Earth’s surface accounts for observer’s generous estimates of size and color.

The Air Intelligence Information Report is part of the Project Blue Book from the National Archives Archival Research Catalog that is searchable online website, which provides access to US military records, including the stories, photos, and personal documents of the men and women who served.