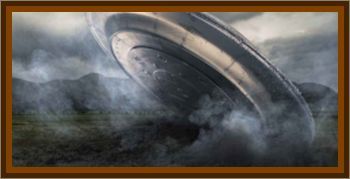 Most local people I’ve spoken to have never heard of New York State’s Roswell, the Mattydale UFO Crash of the early 1950’s.

Franz & Hilde had immigrated to the United States after WWII. Both were working professionals and had been well educated with degrees from noted German Universities.

It had been a late night, it was a Sunday around 3:00 a.m., the couple was returning home from visiting friends. Neither of the two had been drinking that evening.

As they drove past the Thruway towards Hancock Field, they saw the flashing red lights of a police road block. They slowed and looked to see if there was an accident but none could be seen. When Franz turned the corner towards Mattydale he noticed over his left shoulder an object on the ground that appeared to be 20+' across and perhaps 15' high at its center.

The couple noted that there were some sort of phosphorescent lights of different color spaced over the object’s surface. They mentioned that these lights were bright enough to illuminate the men walking around the object and who seemed to be examining it.

Of the various men they saw around the object, some were in uniform, others were not. One of the men had a large camera like press photographers used and was taking extensive photos of the object. Hilde wondered if the object was something she had read about, a saucer shaped AVRO vehicle that was built by a Canadian firm.

What most baffled the couple was that on Monday morning there was absolutely no news about the event on the radio or in the newspaper. They called the city editor at the local newspaper. He stated he didn’t know about but would look into it. Franz called the called the sheriff’s office and discussed what he had seen and was told they knew all about it but was told: It's a Military secret we can’t discuss it.

Franz called the editor and told him what the sheriff’s department had told him. The city editor got really interested.

On his way home from work Franz purposely went to the field where they’d seen the disk. He could see that the weeds and vegetation was freshly flattened down. Also the walls of the gully were packed down in the places where the object had rested. He stated that there were heavy equipment tracks entering from one side and leaving from another.

Later, both the police and the Air Force at Hancock Field denied that anything had occurred. The sheriff also stated that nobody in his department told anybody it was a military secret.

Not wanting to be branded lunatics, Franz and Hilde dropped the whole matter. No other witnesses ever came forward.