Large Saucer Over the Mattagami River 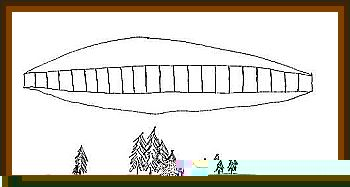 Robert and I had walked to school, as we did everyday to find the school closed. A teacher was there and informed us that there would be no classes today in honor of President Kennedy, who had been assassinated the previous day. Robert suggested that we walk over to his house to find something to do.

At the time we were living in a temporary construction community 80 miles south of James Bay, Northern Ontario on the Mattagami River. 3 hydroelectric power dams were being built on the river and our fathers were working on the project. There were roads from one dam to the next for hauling men and material and no roads to the outside world. Everything was delivered by train from the town of Kapuskasing, 60 miles south of us.

We arrived at Robert’s place and sat on the back step, which faced west. Robert decided to go in and get his guitar that his older brother had been teaching him to play. As we sat there with Robert strumming away I looked up and across the road. There was a single lane dirt road behind Robert’s place about 15' wide. Next was a ditch about the same width and after that a wide, 2 lane road for hauling equipment referred to as the Smokey Falls Road. It was about 60' wide and on the opposite side of that, another 15' wide ditch and then 100' to the tree line.

The trees are small up there consisting of thin, wispy pines in groves and between the groves, moss and tundra. From where we sat, to the first grove of trees opposite to us would be 70 to 75 yards.

I never heard or noticed it arriving, but there it was just sitting there, about 10' higher than the tallest tree in the first grove, which would put it 30' off the ground. I jabbed Robert with my elbow and pointed. We just sat there in silence watching it, as it was watching us. It was huge, with the diameter being half the distance from us to the tree line, so about 100'. From top to bottom at the center the dimension was at least and maybe greater than the height of the trees, 20' in thickness. It appeared to be constructed of dull aluminum and was shaped like a saucer with the exception that the top and bottom halves did not join in a sharp edge. All the way around the center it looked like dark windows, 6' tall.

As Robert and I watched, the craft tilted with the closest side to us down and the rear of the saucer up. It appeared that whoever was inside was trying to get a better look at us. It shifted back down to its original position and then drifted at low speed to the west and behind the trees. The total observation time was probably one minute, although it seemed longer at the time.

That was the last we saw of the saucer, but not the last of the saucer. The construction project went on 24 hours per day, 7 days per week and 2 or 3 nights after the encounter Robert and I had, my father received a phone call at home. I recall him being so angry as he grabbed the keys for the company truck and headed out.

Construction workers need light to work by when the sun goes down and Dad had electricians running the diesel powered lighting plants. 3 electricians had just walked off the job and refused to return claiming that they had come under attack by a low flying saucer. One of the electricians claimed to have thrown a hammer at the saucer as it took a low pass at him and according to him, he hit it.

Dad radioed for another crew to take over the position and was driving the electricians back to the construction camp but had to stop often as one of the fellows was violently sick. The next morning the sick fellow went to the clinic and the doctor and nurses applied cream and then bandaged him top to bottom to sooth and cover his burned, blistered skin.

It was the talk of the town for awhile as folks puzzled over getting that bad of sunburn while fully clothed, working the night shift.

There was no blinking, flashing light in some corner of a dark sky. This was a saucer, up close and personal.

On the few occasions that I’ve discussed it with others over the last 40+ years and I’ve offered this example.

Let’s say it’s a very clear, very bright day and you look across the street to see a school bus parked 150' away. More than likely, you could very accurately describe it.