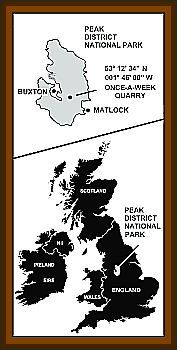 Matlock Triangle, a zone in the Derbyshire Dales which some have been calling the UFO capital of the world. Numerous stories have circulated about odd, glowing objects hurtling over the Dales, from cigar shaped aircraft to one shaped like a bowler hat.

One of the most widely reported sightings was made by Sharon Rowlands, a local woman who considered herself a complete and utter disbeliever, until she set eyes on a giant colorful disk hovering over her village. Rowlands caught the incident on her camcorder, and reportedly sold the footage to a US TV company for a handsome sum.

As with the more famous Bermuda Triangle, controversy still rages over whether these are simply tall tales based on misinformation and bad science, or whether weird events really have occurred on these choppy waters.

Located in Derbyshire Dales, Britain, the Matlock Triangle, as it's come to be known, has fast become recognized by some as the UFO capital of the world. Since the early 2000s, this location has been the center of numerous unusual sightings including undefined glowing objects, cigar shaped craft and one particularly unusual object that was said to have the shape of a bowler hat.

There have been at least 25 prominent sightings in the area. One spectacular occurrence was actually recorded by Bonsall Moor resident Sharon Rowlands on October 5th, 2000 at around 9:15 p.m. The 44 year old was at home with her husband when they became aware of an unusual noise outside of their home. When they went out to see what had caused the strange sound, the Rowlands witnessed the incredible sight of a large disk with unusual markings and yellow & blue lights in the sky, approximately two miles from their home. The craft drew very close, but the Rowlands stated that it was completely silent, not emitting sounds the way a conventional aircraft would. Mrs. Rowlands caught the entire event on her camera and eventually sold the footage to an American film company.

No one is really sure what is taking place at the Matlock Triangle. There are many firm believers in the theory that UFOs are hovering over Bonsall, so many in fact that a documentary has been made about it. Others aren't so easily convinced. Skeptics believe that the sightings are the result of planes traveling to and from Manchester Airport.

The 44 year old mother of two was watching television with her husband Hayden, 45, when they heard an eerie noise and rushed to the window. What they saw at 9:15 p.m. on that night of October 5, 2000 astounded them both. Mrs. Rowlands snatched her camcorder and began filming.

I was filming it from around two miles away, it resembled a giant disk with a bite taken out of the bottom. It had yellow, orange and blue lights, with intricate markings and a dark circle in the center. As it hovered over the woods it seemed to expand and get smaller again. We could see it pulsing as if it started up, and then it just went. It came really close at one stage and I thought it was going to land in the field. You can hear me on the video saying, Wow. It was like nothing I'd ever seen before.

Mrs. Rowlands went on to explain that the object was silent and could not have been an airplane.

In it's May 2001 issue, the UFO Magazine reported that Mrs. Rowlands had placed the video tape in a bank vault, but it has since been revealed that the six minute footage has been purchased by an American film company for a substantial sum of money believed to be in the region of $20,000.

Other Bonsall folk to report sightings include the landlord of one of the village's two pubs, Alan Webster of the Barley Mow, who together with UFO experts, eye witnesses and skeptics alike, was a guest on Carlton Televisions Central Weekend Live program recently.

Alan said: I've seen an electric bar type craft, and then a large UFO hovered overhead. Many people have seen different things, and one lady from the village has sold her video footage to Hollywood.

Alan claims that a series of high powered Americans have visited the bleak and mysterious Bonsall Moor following the spate of reported UFO sightings. Such has been the impact of these amazing sightings that a Nottingham based television documentary team have undertaken a six month detailed investigation into the UFO phenomena throughout the region, with some startling results.

Their report which has interviews with credible eye witnesses and talks with Nick Pope of the Ministry of Defence, also includes actual footage of UFO's filmed over Derbyshire.

Their unique documentary based on the theme of Space and entitled: The Matlock Triangle. Is part of Carlton Television's First Cuts Scheme, which provides new challenges and opportunities for new directors, and is due to be screened throughout the Midlands region by Central Television.

Their company has investigated a large cluster of alleged UFO sightings over a wide East Midlands area icluding Leicester, Nottingham, Mansfield, Derby, Chesterfield, & the Derbyshire Dales in particular, with a reported epicentre believed to be within a ten mile radius of Matlock.

I have been absolutely staggered by the findings. Many people obviously saw many different things. Some saw very bright white lights, others saw varied shapes ranging from triangular objects of pulsing lights, to a cigar shaped craft, a dome shape like a bowler hat, to a large glowing millstone. He added, The triangular shape has been seen in the East Midlands for ten years and consists of three triangular shaped lights with a dark center and just seems to materialize.

He was pleased and surprised by the interview at the MOD and said:

I didn't think Nick Pope would give an interview. He was the desk officer in charge of investigations at Whitehall for three years. He didn't do the interview lightly but said he was convinced that extraterrestrials are entering British air space.

Trevor Howes who appears on camera for the interviews said: The story is amazing....Nick Pope said he had investigated many reports and had been given security clearance to talk to us. He was adamant that many UFOs had been seen in the Midlands and claimed the facts could not be explained. He said the East Midlands and the Derbyshire Dales in particular was Britain's top UFO hot-spot.

What do other Bonsall residents make of these inexplicable phenomena?

As reported in the Daily Mail on February 9th, Mick Pope, landlord of the Kings Head in Bonsall village had his own theories. He said:

Bonsall is very high up, 1,217' above sea level, and after all the heavy rain we've had I reckon they've had trouble with the windscreen wipers on their UFO and had to come down low.

Sitting beside a large purple colored inflateable alien which currently takes pride of place in the pub entrance, Mick recalled UFO reports dating back to 1980. But, he said, while I don't doubt that people have been seeing things, I think the military are testing something around here.

Perhaps he is right, or perhaps the fact that Bonsall is directly beneath the flight path of Europen flights to and from Manchester Airport has something to do with it. Who knows? Perhaps the `Matlock Triangle' television documentary will shed some light into our sceptical darkness? Meanwhile, we can confirm that there have been no reported sightings of any little green men in the area.