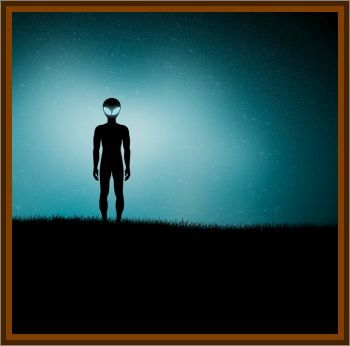 Mr. Masseron sleeping in a trailer was awakened by blows on the trailer, and scratching sounds, then the vehicle was shaken. He looked out and saw, a few dozen yards away, a luminous egg shaped object about 5' tall and 3' wide, resting on the ground or very close to it, its upper half was green and its lower half red.

This rose up in a spiral, emitting a sound like a jet taking off, then hovered motionless at 50' altitude, and then disappeared.

Mr. Masseron opened his door, and heard something like a message as received on a walkie talkie set, with a background of static, the only thing he could understand was the reiteration of the letters 'L.P.X.'

He then noticed something moving at his left, and saw a dark human silhouette running across the road near his trailer.

He noted as peculiar, the man’s whole body was oriented on the axis of prolongation of his right leg.

At the same time Ms. Zamora, sleeping in a nearby trailer in the trailer park, had been awakened by voices, she heard one voice ask:

What shall I do?

She opened a window and at once heard the walkie-talkie message. Then she observed, apparently at the same place where Masseron had previously seen the UFO, a luminous ellipse, green above and red beneath, which was jumping up and down.

She woke her husband, the ellipse was now gone, but the message was still continuing.

The investigator, searching on the same night, found rather curious footprints, at the place toward which the man had been seen running.