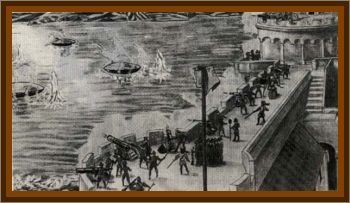 In August of 1608, people of southern France, from Marseilles to Genoa, witnessed a true wave of UFOs, as reported in a chronicle of the time entitled, Discours des terribles et espouvantables signes apparus sur la mer Gennes.

In the sky over Martigues an aerial battle took place which left an odor of saltpeter, gun powder.

The inhabitants of Nice saw three strange luminous vessels moving at high speed above the city. The vessels stopped close to a fortress then went down into the sea causing the water to boil and release a reddish colored vapor.

To the amazement of onlookers, two humanoid beings with large heads and large luminous eyes, and reddish scales connected to their vessels by tubes, passed several hours in some kind of strange work.

Also off Genoa, an aerial battle took place between flying objects and other craft emerging from the sea. The soldiers of the fortress delivered 800 rounds of cannon shot to drive off the intruders, inflicting no damage.