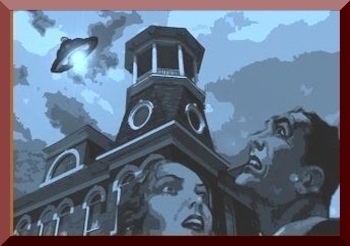 It was 6:55 p.m., in a little hamlet, where Johannson lived at the time. He was the electrician in charge of the central switch plant which served the plant where he was employed. He was on his way out of the house when his son, 25, was coming in and they exchanged words about the blackout which had just plunged the area into darkness.

It’s jet black everywhere, but not up there in the air, and pointed at the sky. Looking up, Johannson saw a bright white light and thought it was an airplane with engine trouble and told his son to get the people out of the house because the thing was coming down toward the house, and he was afraid it would set the house on fire.

It took only seconds for the two men to realize that it was no airplane of any kind, it was completely soundless and hovering dead still in the air. Then it began to move, lowering itself slowly, passing over a nearby building, and buzzing the top of a maple tree, which when examined later, was found to be damaged.

Johannson’s son yelled at him to get out of the way as the thing was lowering itself toward the street.

Not much could be made out of the craft itself, because of the brilliant illumination inside the glass enclosed top. Inside this transparent enclosure could be seen two figures.

He thought there were some kind of apparatuses sticking out of their ears and they wore black belts across their chests. One seemed to be very busy with something and the other just sat glancing from his companion to Johannson.

The object was now only 6½' above the street, and Johannson later commented that it must have been quite small to have been able to navigate that street, which was 20' wide. It came within 16½' of Johannson, enabling him to see the occupants quite clearly.

Johannson followed it about 100' along the fence line of his lot and then it stopped and the light went out. They did not see where it went, there was just darkness everywhere. Johannson estimated that the whole incident took only two minutes, after which he hurried to the switch plant. He found nothing wrong there and in a few minutes, the power came back on with no help from anyone.

The power company never did find any cause for the blackout, but Johannson was of the opinion that the UFO was linked to it somehow. Johannson noted that when the craft left, his pants flapped around his legs from the draft, and he felt shaky. His wife told him that inside the house, the radio rattled and went dead when the lights went out. Johannson noted that of the people in the town, very few saw the craft because they were busy hunting for candles and lanterns.