A Strange Phenomenon - End Of The World 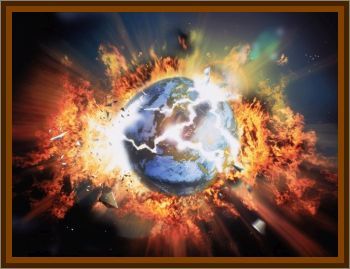 During the night, which was rainy and tempestuous, a family of 9, sleeping in a hut about 10 miles from Maracaibo, were awakened by a loud humming noise and a vivid, dazzling light, which brilliantly illuminated the interior of the house.

The occupants completely terror stricken, and believing, as they relate, that the end of the world had come, threw themselves on their knees and commenced to pray, but their devotions were almost immediately interrupted by violent vomitings, and extensive swellings commenced to appear in the upper part of their bodies, this being particularly noticeable about the face and lips.

It is to be noted that the brilliant lights was not accompanied by a sensation of heat, although there was a smoky appearance and a peculiar smell.

The next morning, the swellings had subsided, leaving upon the face and body large black blotches. No special pain was felt until the 9th day, when the skin peeled off, and these blotches were transformed into virulent raw sores. The hair of the head fell off upon the side which happened to be underneath when the phenomenon occurred, the same side of the body being, in all nine cases, the more seriously injured.

The remarkable part of the occurrence is that the house was uninjured, all doors and windows being closed at the time.

No trace of lightning could afterward be observed in any part of the building, and all the sufferers unite in saying that there was no explosion, but only the loud humming already mentioned.

Another curious attendant circumstance is that the trees around the house showed no signs of injury until the 9th day, when they suddenly withered, almost simultaneously with the development of the sores upon the bodies of the occupants of the house.'

This is perhaps a mere coincidence, but it is remarkable that the same susceptibility to electrical effects, with the same lapse of time, should be observed in both animal and vegetable organisms.

The sufferers, who are now in one of the hospitals of this city, and although their appearance is truly horrible, yet it is hoped that in no case will the injuries prove fatal.