Lights Moving Across Sky During Daylight 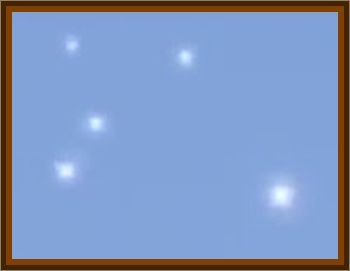 It was in mid July or August during the 1950's, summer vacation time. Thinking hard about it but still not sure, it would have been around 1952 through 1955 time period. It was mid afternoon. I lived in Manville.

I had been acting up, and my mother sent me upstairs to my room as punishment. I wanted to be outside playing with my friends, but here I was stuck in my room looking out the window, feeling sorry for myself. I was there for some time.

From behind one of the houses on the hill, appeared first one colored light, then several more. They were moving in a group of about a dozen lights, evenly spaced. Each light, was a different color. Each light being about the size of a pencil eraser end at arms length. The group was about the size of a soccer ball held at arms length. The lights didn't blink, the colors they were, remained steady. Orange, green, red, and one or two almost white. They were moving from the south to the north.

I watched in silent amazement. The group moved across the blue sky, then behind some of the elm leaves and again they appeared in a patch of blue sky and then disappeared behind more leaves and were gone.

During the 50's planes made noise, a lot of noise. We were directly under the flight path of four engine planes flying to Boston's Logan airport 60 miles to the northeast. You not only heard the planes go by, but you felt them. The noise would vibrate though you. There was no traffic in the nearby street at the time I was watching the lights only a few birds chirping here and there. It was this thought that filled me with fear. What I had just witnessed passed by without a single sound, nothing. As the fear built up in me, crying I ran down the stairs to tell my mother. I think she thought I was putting on a performance, to be let out. She comforted me, and sent me outside. I didn't want to go, but she insisted. I then sat on the porch, looking up at the sky thinking about what I had just seen.