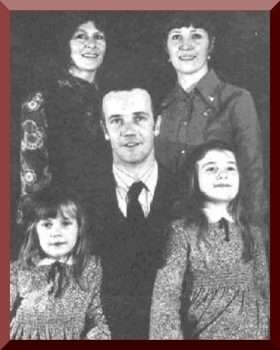 When John Mann, his wife Gloria and his sister Frances, along with their two children, were driving home from Reading, Berkshire to Brockworth, Gloucestershire, and realized they couldn't account for nearly two hours of their journey.

They set off at just after 9:30 p.m. and expected to be home around 11:00 p.m. It was a journey they had made before and knew the route well.

A little after 10:00 p.m., after they had just passed Stanford-in-the-Vale in Oxfordshire, the three adults, the children were dosing in the backseat, all saw a brilliant white light in front of them. They followed it for a mile or so, with the light maintaining it's distance. They could see the full moon so they knew it wasn't that, and all agreed that it was too big to be a star.

John pulled the car over and stepped outside the vehicle in an attempt to see if there was any unusual sounds he could make out. Almost instantly a red light flashed on beside the white light, that was now growing larger as it made it's way closer to them. John would later recall he could hear a mixture of a swishing sound and the scoring noise of a train's wheels against the track.

His wife screamed at him to get back in the car! It's going to land! which awoke John from his trance. He sped off away from the light.

After 300' or so though he realized that they were not on the A417 road that they had just been on. They were on a small, windy road with sharp bends that was hemmed in with hedges that he could not see over.

I had this strange feeling that if I had taken my hands off the wheel, the car would have driven itself.

They rounded another bend and found themselves suddenly in Faringdon, Gloucestershire, although John could not recall passing the usual Welcome to Faringdon sign that he normally would have.

They also noticed again the ball of light, although this time it was behind them, keeping pace, but not pursuing them as much as keeping them in sight. Frances recalled later that it would disappear whenever they drove past a group of houses.

By the time they had reached the village of Cirencester, it had vanished.

Expecting it to be just after 11:00 p.m., the three adults were shocked to discover it was well after midnight. Frances insisted on driving her own car to her own house in Stroud several miles away, and after the Mann's had put their children to bed, John rang RAF Brize Norton to report the UFO.

The following day, still very shaken, John tried to locate the twisty, winding road they had driven on the night before but could not do so. He also attempted to find the field where they had seen the ball of light land before they had taken off at high speed. Again he couldn't and John began to wonder if they had had some kind of group hallucination.

Just as they were beginning to think they had imagined the whole affair, John noticed that he had developed what looked to be heat rash on the lower part of his chest which was extremely irritable and itchy. When he informed his wife, Gloria, she revealed that she too had similar markings on her left arm and leg. Upon speaking with Francis she confirmed that she also had developed itchy skin that resembles a heat rash. Even stranger, all of them had discovered substantial bruising below their right knees with no idea how it had become bruised.

The final straw for the Manns were several disturbing nightmares that their daughter Natasha had over the weeks following the drive home.