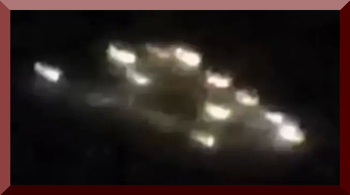 The first in this series of observations began at 4:00 a.m. local time, when a farmer in an area north of the town of Baras saw an object descend, making a hissing sound like an electric welder. It had a light on the front of it.

The farmer took a flashlight and left his hut to get a better look at the craft, which he estimated to be about 100 yards distant. As he approached, he saw what he described to investigators as a white vehicle as big as a Volkswagen beetle with two occupants.

The vehicle had small wheels and six big exhaust tubes at the rear, each the size of which was comparable to the thickness of a man’s leg. The body of the vehicle was milky white in color, the farmer said, and had a transparent canopy on the top through which he observed two occupants who were dressed in white overalls with earphones on their heads. He said they looked like ordinary Caucasians, and one was taller than the other.

When the farmer approached the object, it emitted a loud roar, and he ran off in fright. He then observed it as it moved forward on the ground, on the wheels, until it reached a clearing, whereupon it took off. The roar made by the object was only apparent during its horizontal movement on the ground, and during its vertical ascent, there was not much noise. The investigator tried to determine if there had been a downward blast as the object rose, but the farmer replied in the negative. He pointed out that the object’s horizontal movement on the ground, accompanied by the roar, caused dust to fly, but there was no dust when the object took off in vertical flight.

The second observation occurred two hours later, at 6:00 a.m. Another farmer who was walking to Baras suddenly felt that something had landed behind him. He looked around and observed what he described as a strange, white car with two people in it. He ran as fast as he could and reported the incident to the mayor of Baras.

This observation lacked detail, but the description is of an object very similar to the one observed earlier.

At 8:00 a.m., a farmer plowing his field with his son observed a white object hovering silently over them. Investigators were not able to investigate this particular report because the farm in question was located in the middle of a mountain range and was very difficult to reach. Also, inasmuch as a detailed description was not given and no humanoids were viewed, it was not considered significant to the group of observations.

The fourth observation, however, occurred at 11:00 a.m. at the same place as the first sighting, but involved another farmer who was riding his bicycle up an incline coming from Baras. Upon reaching the top of the grade, he saw a strange car downhill from him. Although he felt undecided whether or not to continue, he let the cycle carry him downhill towards the object and he passed right by it.

He told investigators that he saw two men, one was inside and the other was outside looking around. The latter, he said, was very tall, and looked like a Caucasian. Both were wearing white coveralls with a head cover that had two black objects on the sides.

He continued cycling and stopped after about 50' and looked back. The man who was outside the vehicle was watching him. He considered returning to speak with him, but then the man climbed into the vehicle, which the farmer described as resembling a Volkswagen and was about the same size. There was a loud roar as the object moved up the hill from where the farmer had come, then took off vertically and silently.

Investigators pointed out the similarity of the object and occupants to those observed by Lonnie Zamora at Socorro, NM, four years earlier. In both cases, the objects were white and at first, Zamora thought the vehicle he saw was a car.

Also, the occupants in both cases wore white clothing. But there, the similarity ends, for the Zamora object had four wedge shaped pads, whereas the objects described by the farmers near Baras described wheels. Also, the Zamora craft made a roar while landing or taking off and was silent during flight, whereas the Baras vehicle made a roar while running along the ground.