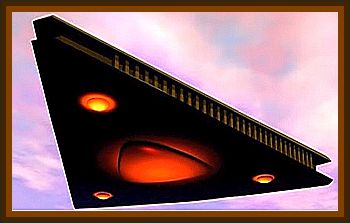 I just wanted to report having seen a black triangular shaped craft back in the 1970's.

My sister and I saw this one evening while I was baby sitting her when my parents where working that evening.

I'm a bit worried because I reported this when we saw it, and was warned off saying anything else about the event. Being quite young I of course followed orders.

I was somewhat scared of these people. However, I recently moved elsewhere in the UK and in this area there was a UFO flap during January, February & March.

I saw a couple of the light shows recently, and called the local coastal radar station to ask what these low flying lights might be, and through the phone call had a visit from the MOD.

It seems I'm on file even after all this time, and I do not like the idea of being considered public property by certain government departments. I wouldn't mind so much if I had led an unusual or eventful life, but I'm just a middle aged housewife who seems to have a file with the government?

We were sat in the living room of my mothers home which has windows overlooking both the rear and front gardens. I'm sure of the time because we had just finished watching a TV program that finished at 8:30 p.m. My sister saw a strange light in the back that she described as like a glittering ball of light a bit bigger than a tennis ball. She saw this in our neighbours garden and it seemed to be hopping around the plants and hedges.

I got the full description after the event I am about to relate.

My sister told me she'd seen something odd in our neighbors garden, and she thought that perhaps his hedge was on fire. I got up to go to the window to take a closer look, and I couldn't see what she had seen, but as we stood together a huge cluster of lights descended from the sky towards us. The lights were a blue/green in color and looked like a cross section of a craft. The lights came towards us a tremendous speed.

We ran from the house thinking some kind of aircraft was about to crash on us, and as we stood on the front path wondering why we were still alive a black triangular shaped craft covered in a multitude of different colored lights flew slowy over us. If there had been enough room for it to land I'm sure it would have done.

In the meantime a commercial aircraft heading towards Manchester International Airport came into view and the craft took off after it and seemed to be playing tag with it all the way to the airprort.