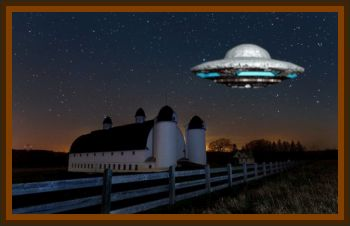 We lived in a farmhouse on the edge of a rural town of about 1,000 people.

Our backyard was actually 80 acres of grass field, former farmland left unfarmed for many years. There was an old two lane road which extended from our driveway out into the back 80, past the barn and out into the grass field.

It was a warm early summer evening, the skies were clear, and we were inside watching TV.

Our foster daughter burst into the back door:

Come Look. Quick. There is something in the sky out in the back field.

We kind of laughed at her, thinking she was being melodramatic, or attempting an attention getting move or perhaps even hoaxing us, but when she repeated what she had said, the second time more insistent than the first, well, we saw something in her eyes that said there might be something wrong, if you are a parent, you know the feeling.

It seems that she and her boyfriend were unknown to us at the time, parking on the dirt road which ran through the grass field behind our house.

The radio went out on their car as soon as they saw the object… then they both made it back to the house to let us know about the UFO thats when she ran in the door.

So we went out the backdoor and into the yard, listening to our foster daughter babble about:

It went down this way and then up twice as far this way, like a pattern.

When I looked up and saw the object, hovering, over the field behind our house. I estimate it was no farther than 1,000' away from me, hovering about 200' to 300' in the air.

It was metallic and disk shaped…and all along the rim it exhibited colors changing from red/orange/white/blue there were 4 of us there in all, 2 people also saw a greenish tint. But, what made me stand there slack jawed was the sound the darn thing was making, it was a loud vibrating humming low pitched tone.

And it vibrated into and through everything.

I was standing adjacent to an old out building in the backyard, and the siding on the building was actually rattling/humming from the noise. I reached out my hand and touched the building and it literally was vibrating.

I have since estimated the humming/vibrating to have been very near 39 to 40 Hertz.

And, as unbelievable as this sounds, and it makes me realize why there aren’t more good quality pictures/videos taken of UFOs, I had a brand new Nikon F camera in my house and didn’t even think of going in and getting it.

The 4 of us stood there, slack jawed, me, my wife, my foster daughter, and her boyfriend… and none of us said a word for 10 minutes. We just stared, transfixed at this thing in the backyard that just sat there humming.

It finally, about 10 minutes later, very slowly maybe 20 mph, drifted off to the southeast, toward a very sparsely populated rural area of our county. I lost sight of it in the street lights when it went across the sky.

We all went inside and recounted to each other what we saw, felt, and heard. And I really think that is when we all just shut up about it and none of us has said a word to anyone, except very good friends, until now.

The time has come for an explanation from someone, from our government, or whoever the powers that be are in this country.

What the Hell did we see in the sky behind my house? I have had several college level astronomy courses. I know the difference between an anomaly and an ordinary occurrence. I did not see Venus, Swamp Gas, or a Weather Balloon.

I used to be a UFO skeptic, and I have purposefully left the term extraterrestrial out of the account as I saw no evidence of life or intelligent maneuvering of the object.

But, I can say with 100% assuredness that there was something unexplained in the skies over Mancelona in the summer of 1978.