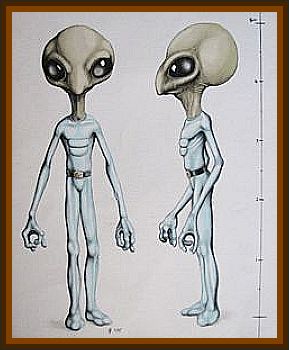 A Tennessee truck driver for Cook Lines reported meeting three little men on the road about 15 miles northwest of Meridian, on State Highway 19. He was on his way to Meridian from Memphis, TN.

The driver, Malvin Stevens, 48, of Dyersburg, is described by his fellow workers and company officials as a reliable family man not given to practical joking, and they stated they were inclined to believe that he saw what he said he had seen. Malvin said he first thought the object, which was parked on the highway, was a weather balloon. He said it had a single propeller blade on each end and a third propeller on top. Stevens got out of his truck and was met by three little men who came out of the thing. They were about 4½ feet tall, wore gray clothing, and had pasty white faces. He said they seemed friendly and wanted to talk, but he couldn’t understand their chattering. I stood there for what seemed like an eternity, they got back into the machine and it took off, straight up.

When he first spotted the object, it had no effect on his car engine as was the case in some stories of UFO landings. People to whom he talked upon arriving at Memphis said Stevens was visibly shaken and white as a sheet. Although the experience lasted only about two minutes, Stevens said it seemed like an eternity.