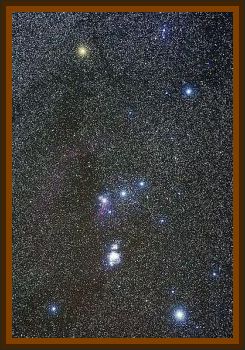 This is an interesting distant sighting which appeared to be of unidentified objects in orbit.

Obviously all that was seen were points of white light, however the moment patterns they performed is what makes it impressive.

Let’s first assume that the objects were out in space as they appeared to be, rather than at high altitude in the atmosphere. They could not have been satellites as these move on a straight course at a constant speed, they cannot move from a standing spot or change direction at all. Meteorites cross the sky extremely fast and again move in a straight line.

It appears that the objects were under intelligent control. At the start of the sighting there only appeared to be a single object, at which point it was indistinguishable from a star. It is only when it split into 2 and began instantly moving that the boys took an interest in it. It is impossible to say whether it was a single object that separated into 2, or whether it was 2 objects in close proximity that looked like one until they began moving away from one another.

If we assume that the objects were spacecraft of some kind, then nothing we currently know about would have made such manoeuvres. There is the slim possibility that the objects were actually at very high altitude rather than in outside the atmosphere. If this were the case then the only reasonable explanation would be 2 helicopters. Lit inflatables seem very unlikely for a number of reasons. The lights were white so could not have been Chinese lanterns, as these are usually amber orange in color and tend to flicker in brightness. Also they were not available to purchase back in 1978. LED balloons have only been available in recent years. Also the movement patterns observed were too directed to be inflatables drifting on air currents.

Aeroplanes cannot remain still in the sky for a period of time. When viewed at the horizon they can appear to hover if flying towards the observer, however the point of light the witnesses initially observed was overhead so could not have been a plane. Nor does this explain how it could split into 2. It seems improbable that the objects were helicopters. If this were the case then initially they would have to have been positioned one directly above the other so as to appear as a single point of light. Also even at high altitude it is usually possible to see other navigation lights or flashing strobes. Looking at these possible explanations, it seems much more likely that the objects were in orbit, and were also under intelligent control.

Do we have manned craft out there which we have not been informed of? Or were these objects of another origin entirely?