It Wasn't Sputnik Or A Satellite 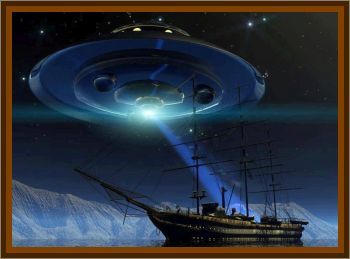 I was on the midnight watch on the island in a old Gun Tub behind the bridge with another guy on watch outside of the ship.

There's around 14 salors on watch, all around the outside of the ship, were looking for anything in the water, on the water, other ships, aircraft...anything.

There were 2 nights in a row this happened. The ufo only at first I though it was Sputnik or a Satellite. No moon, water slick as glass. Surrounded by around 10 or so ships each 25 to 30 miles away, ya can see every star in the sky. One seemed 2 be following us.

I pointed it out to Jon, who was on watch with me & told him that I believed it was a Satellite, Sputnik or maybe a very high flying plane, so,i just kept watching it. I could not keep my eyes off it, the sky was so bright with stars.

After all this was my first time seeing a Sputnik Or A Satellite. I'm looking at it, and it stops, it stops right in the middle of the sky. I though to myself was it following us? Why did it stop? Can Sputnik & Satellites stop in mid air?

Now that it stopped it was harder 2 keep my eye on it, as I pinpointed it between other stars, I look at my watch, all this time I've been reporting it to the bridge, it all gets logged in. We wore headphones, you know it's all reported.

5 minutes.goes by, 10 minutes, how can it just sit there like that, and not move, is it gone? Did this really happen? 15 minutes now gone by, it seems like hours, then it moved. It moved again, and kept moving.

But how could do what it just did? No way. The ship has made no turns of any kind at any time, but when the UFO, yes i said UFO, started back up,it went 45°, it turned, it's going away. I watched it till it was out of sight, it made a turn. The next night was wonderfull,this time it was at eye level and seemed as big as an aircraft cairrer, but thats anothe rheart stopping moment. Wow, if ya know what i mean.