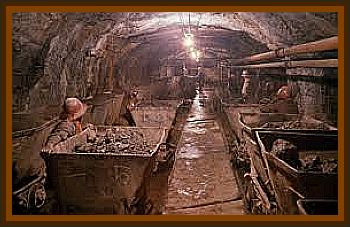 The area is known to its residents as Malopolska, Little Poland, and it’s the site of one of the stranger mysteries of World War II.

Jordanow, the Beskidy Mountains and the entire region between Krakow and the alpine resort community of Zakopane, on what is now the border between Poland and Slovakia, fell to the Nazis in the early days of the war. On September 6, 1939, the German 14th Army, under Field Marshal Wilhelm von List, captured Zakopane and Jordanow.

Within a week, for reasons never explained, the area was placed under the direct control of the SS. The area remained under Nazi rule until the arrival of Soviet Russian forces in January 1945.

In 1994, Polish author Robert K. Lesniakiewicz interviewed former soldiers of the Armia Krajowa, Polish for Homeland Army, who had fought the Germans until January 1945. They saw the SS mining for uranium oxide in the Beskidy Mountains near Jordanow.

The Zarnowka and Grzechynia buildings and bunkers were built by local peasants and Russian, Ukrainian and Italian P.O.W.s. My mother in law was a prisoner in Grzechniya in 1943. They were guarded at first by SS men and at the end of the war by Wehrmacht, German Army, soldiers. After Benito Mussolini was ousted in September 1943, Italy turned against her ally, the Third Reich. The Italian P.O.W.s at Jordanow were troops loyal to Marshal Pietro Badoglio.

All of the local people, civilians, were sent to the concentration camps at Oswiecim and Oswiecim-Brzezinka, better known by their German names, Auschwitz and Auschwitz-Birkenau, west of Krakow, Lesniakiewicz writes.

The SS and, in particular, their leader, Reichsführer SS Heinrich Himmler, took a keen interest in Jordanow and its environs. Numerous uranium oxide mines were opened and worked between April 1940 and November 1944. Himmler also tested several Nazi wonder weapons in the region.

Grzechynia is a village 3 miles, from Zawoja, Lesniakiewicz reported, The Nazis had a base for developing the V-3 rocket, the Tausendfüssler, also known as Schnelle Elise or the Hochdruckpumpe, a 152-millimeter supercannon that could propel 9' long projectiles to distances of 27 to 30 miles.

The Germans fired them at a test range at Przezeck Krowiarki Pass, towards the Tatra Mountains. Their long term objective was to bombard London with these big cannons, from the French village of Mimoyeques. The Allies destroyed the V-3 base there.

The SS secret projects around Jordanow soon drew the attention of their enemies.

During World War II, the Beskidy Mountains were controlled by the right wing Armia Krajowa and the left wing Armia Ludowa, Polish for People’s Army, Also operating there were Soviet parachute troops of the OSNAZ, Osobyennoye Naznachenye, Russian for Special Task Forces, of the NKVD, commanded by NKVD Captain Alexei Lotov.

According to the Polish resistance fighters:

They also observed Russian geologists and NKVD, later the KGB, officials, who penetrated these mountains in October 1956. They did not find any uranium ore. Conventional World War II history teaches that Hitler’s nuclear research program was based in Norway. The processing plant was destroyed in an Allied air raid in 1943. Yet here was the SS, mining uranium oxide by the ton in southern Poland throughout the war. The ore is processed into enriched, weapons grade uranium. What became of all that uranium?

Himmler visited Zakopane twice, once in the winter of 1939-1940, when he met there with high ranking NKVD officials, and again in 1943. During his second visit to the mountain resort city, Himmler himself led the extermination of all the Polish and Jewish inhabitants of the Beskidy Maly area. All of the local people were sent to the concentration camps.

Apparently, Himmler had sent the SS to Jordanow on a magickal mission.

According to local legend, there is an entrance to Agharta, or Interterra, also known as the Underground World, placed on the southwestern slope of Mount Babia Gora, elevation 5,692', just across the border in Slovakia.

Himmler sent several dozen speleological expeditions to the Tatra Mountains and the Beskidy Mountains, as well as to the Slovakian, Czech and Hungarian mountains. He was especially interested in the Domica-Baradla Cave in the Slovakian-Hungarian borderland. He hoped to find the entrance to Shamballah, but he did not do it.

The SS searched for the entrance to Agharta on Mount Babia Gora and at the Half Moon Cave in Byelanskye Tatra. However, long before he became the Reichsführer SS and the self styled Lord of Atlantis, Himmler was interested in the Jordanow region and its local folk tales of a passage to the Underground World.

In 1892, the Polish architect Stanislaw Witkiewicz purchased a summer home in Zakopane, 25 miles south of Jordanow, then part of the Austro-Hungarian Empire.

With his friend, the composer Karol Szymanowski, Witkiewicz founded a writers’ and artists’ colony. The group, which dabbled in theosophy, soon attracted a writer from Vienna, Dr. Friedrich Wichtl.

Dr. Wichtl was an occultist who specialized in Masonic lore and world conspiracy theories. He was a frequent visitor to Villa Koliba, the colony’s meeting place in Zakopane, and to Lake Morskie Oko.

It is possible that Himmler may have met his mentor, Dr. Wichtl, 6 years earlier, when he was a young teenager. In the summer of 1913, the future-Reichsführer’s father, Dr. Gebhard Himmler, was appointed vice principal of the Gymnasium, high school, in Landshut. The elder Himmler celebrated this prestigious appointment by taking his wife and 3 sons, including 13 year old Heinrich, on a tour of Austria-Hungary. The family spent some time in Zakopane and, as was their custom, went swimming on hot August days in Lake Morskie Oko. Dr. Wichtl also was in Zakopane at that time. Although they both shared a vivid interest in the Underground World, Himmler’s diary makes no mention of any meeting with Dr. Wichtl.