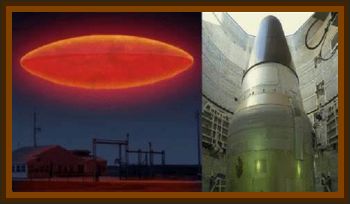 Bob Salas claims he himself saw a UFO, while he was on missile alert duty at the Malmstrom military base in Montana in 1967. He said a glowing red object hovered over a launch control capsule and then shot a beam of light at the warhead that left 10 Minuteman intercontinental ballistic missiles disabled.

Ex U.S. Air Force Captain Bob Salas has demanded the government release all information it has on UFO incidents at nuclear sites in the United States. Salas has started a campaign to raise money in order to hold a press conference to draw the public's attention to the issue of UFOs and nuclear weapons.

According to a statement posted, the money will also be used for lobbying activities in Washington, D.C.

It is time for the U.S. Congress to hold public hearings on the Unidentified Aerial Phenomenon, UAP. There are many ex military witnesses who can verify UFO incidents of nuclear weapons bases.

The current period in time represents a unique opportunity to promote open and public disclosure of long held secrets by government agencies, reads the statement.

One individual, who donated $500, wrote the following statement:

I had first heard about UFO incursions on nuclear weapon sites from a Physics Professor at Montana State University when I was a graduate student in 1988. The whole thing sounded ridiculous to me then. But it was the 2010 National Press Club conference that I saw, which convinced me that this was real and important and that I needed to do something about it. This is one way I hope that I can give back. This is a global issue, and quite possibly one of the most important issues facing humanity.

Another person, who donated $200, wrote that his father was a witness to a UFO interfering with the United States nuclear arsenal and he would have liked to have heard what our government knows about who or what was behind it.

Bob Salas is not the only person to speak about the need for government officials to investigate UFO sightings at nuclear facilities. Senator Harry Reid spoke about the issue in the documentary The Phenomenon.

Reid, who in 2007 secured funding for the Advanced Aerospace Threat Identification Program, a Pentagon project that examined the U.S. military's encounters with UFOs, alleged that there have been numerous reports of mysterious objects flying above U.S. nuclear facilities over the years.

Do aliens zealously want to learn about U.S. nuclear programs? The Pentagon has given an ambiguous answer.

In its recently released dossier on UFOs the Defence Department revealed that there have been over 140 sightings of mysterious objects with no possible explanation, but it stopped short of calling UFOs extraterrestrial ships. The Pentagon said that the eerie objects could belong to rival powers such as Russia or China.