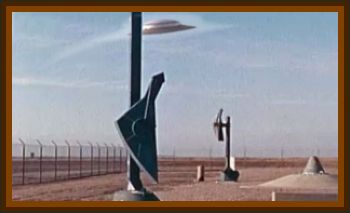 Rank of Captain, USAF was on duty at Malmstrom AFB in Great Falls, Montana when an incident occurred quite similar to that reported in the 1975 newspaper article,UFOs Intrude Into SAC Base Weapons Areas you have posted on your website.

My friend was made aware that sensors surrounding one missile silo recorded a rapid rise in ground temperature, from -25°F to -30°F to 50°F or 60°F, within the space of 5 to 15 minutes.

Simultaneously all the sensors on perimeter fences showed that whatever was occurring had not been initiated by something crossing the fences nor had any of the ground sensors indicated anything had walked by ground passage up to the missile site.

He said he was told that the missile silo cover had been set aside, that crew from the unknown craft broke into the missile silo, and some of its crew were examining the circuitry of the ballistic missile.

At least one Observer on the U.S. military reaction team arrived to see crew scampering aboard the craft.

Apparently as is SOP, fighters scrambled. My friend said when the radar target appeared on his radar scopes within a few moments of the reaction team's radioed report, it was travelling straight up at a speed in excess of 50,000 mph. It disappeared by moving outside the range of the radar his NORAD shift was using.

When he told me this he began perspiring profusely and was very nervous and discomfitted. As a decorated Vietnam combat veteran I know nervousness and a few things about fear. My friend was very nervous, a bit scared, and upset.

If we had not been such good friends he probably would not have told me about this. He did know about one prior UFO experience I had, and before this happened used to give me grief about what I had told him had happened to me. Ever since that conversation I am now reporting, he has never made fun of UFO sightings or reports.